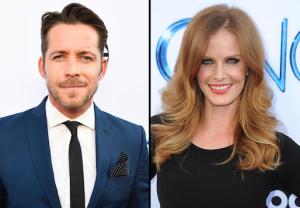 ABC’s Once Upon a Time has promoted both Sean Maguire and Lost alum Rebecca Mader to series regulars for Season 5, TVLine has learned.

Maguire made his debut as Robin Hood in Once‘s Season 3A premiere, and over two seasons gradually secured his place as Regina’s one true love.

Mader first popped up as the Wicked Witch aka Regina’s half-sister Zelena in a coda to the Season 3A finale, before proceeding to wreak havoc throughout 3B. After seemingly being vanquished in Season 3’s penultimate episode, Zelena surprisingly resurfaced this spring, having had (apparently!) traveled back in time with Emma and Hook and used a glamor spell to pass herself off as Marian.

Currently carrying Robin’s child, Zelena last was seen being locked up by Regina for — how do we put this nicely? — “safe keeping.”

Which of these promotions delights you most, Once fans?