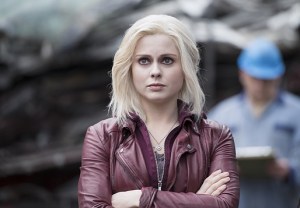 Warning: The following contains spoilers — of the major variety and about Major — for Tuesday’s season finale of iZombie.

Is the iZombie apocalypse upon us?

On Tuesday night’s Season 1 finale, Blaine gutted Major — forcing Liv to turn the love of her life into a zombie. Of course, the catalyst for all that drama was Major going all Taxi Driver on Meat Cute and taking out the brain dealer’s posse! (More on that awesome sequence below.) When Major argued that his ex didn’t really know him if she thought that was the kind of life he wanted, she injected him with the cure and prayed for the best.

Rather than killing Blaine — if he dies, the hungry zombies of Seattle will just eat everyone — an angry Liv stabbed him with the other half of the cure. Meanwhile, Max Rager unveiled its plans to be an even more evil empire by producing a crazy new energy drink. But first, they’ll need to eliminate their undead problem.

Finally, Liv’s brother got caught in the Meat Cute explosion, and she refused to donate her blood to save him for obvious reasons.

TVLINE | There’s not one, but at least three major cliffhangers in the finale. Was that always the plan, even before the show was renewed?
Yes. In fact, it’s been the plan for a long time. When we offered [Robert Buckley] the role of Major, he called me and said, “Listen, I just want to make sure that I’m not just going to be the boy that Liv pines for, that I’m going to have something to do,” and I pitched him the exact ending of the show. I said, “It’s going to end like Taxi Driver. You going into the zombie headquarters and mowing people down. You will have gone through this horrible journey. You will have this moment where you get to take out all these enemies.” So we were always building to that.

And probably around midseason, we had some ideas on how we wanted to reset for Season 2. We announce our big Season 2 storyline right there in the finale. Vaughan, the head of Max Rager, says, “We’re going to take out all the zombies.” So that will be a big part of Season 2, and it will make Liv and Blaine strange bedfellows. One of the things that was rough in Season 1 was we loved those two actors on screen together, but part of the season arc was Liv searching for Blaine. We couldn’t play them on screen. Next season, you’ll see a lot more of them on screen, at the same time, with a common enemy. 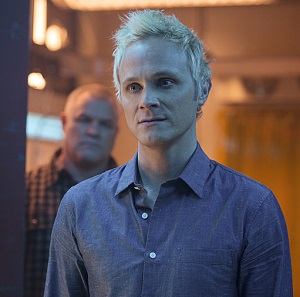 TVLINE | Is it safe to say that Blaine as a human, even without his zombie strength and rage, is still not a nice person and a dangerous threat to Liv and Major?
Yeah. We’re not going to make him cuddly next year. If you talked to me a few years ago, I would have thought, “Well, how in the world, after him spending Season 1 murdering homeless teenagers, could we ever believe him as anything but evil?” Then you watch Game of Thrones. Somehow, Jaime Lannister has become a sympathetic character even though he threw a young boy out a window in Episode 1. So it can be done, and maybe someday, we will attempt that. But for the immediate future, Blaine is bad.

TVLINE | Can he keep his business going as a human?
That’s going to be part of the fun of Season 2. He will need to trick his clientele. Next season, he may be passing as zombie in order to maintain the fear, which I think we’ll have fun with.

TVLINE | So instead of tanning, he’ll be putting on powder.
It’s funny you say that because we already have a scene up on our writers’ board in which we will see him getting powdered up in order to appear as a full-blooded zombie.

TVLINE | The Max Rager folks want to take out all the zombies. Does Suzuki taking himself out and pointing the finger at Blaine play into that?
We are going to make a meal of that moment. But that part of it is going to be Clive’s story in Season 2. Suzuki is going to get credit for being the hero of Meat Cute, and the police are going to very quickly and neatly wrap up that case, but Clive isn’t buying the story. He will be looking for Blaine and believing that Major has a connection to that. So that will be Clive’s great white whale of Season 2 — trying to solve that case.

TVLINE | If Liv’s brother dies, does that undo all the emotional progress she’s made?
Yeah, that would probably send her back into a pretty deep valley. 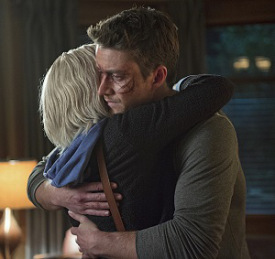 TVLINE | Major now knows the whole truth. What does that allow you to do that you couldn’t before with Major and his relationship with Liv?
Now that they both know, and Major knows what he’d be getting into, we’re toying with, could they try a romantic relationship in which no bodily fluids were exchanged? It’s sort of a great existential question of, could you have a romantic partner with whom the sexual limits were very, very strict? How would that go? We may explore that.

TVLINE | Now I think The CW should have paired the show with Jane the Virgin and done A Night of Abstinence.
[Laughs] That would be funny.

TVLINE | How changed is Major going to be in Season 2?
He has now killed a bunch of people. It has changed him. We wanted to paint him as a good a guy as you could ever want to meet, like the perfect guy. Lovely, sweet, charming, funny. And then just put him through a ringer and see who came out on the other side. I do think it has affected him. He is less innocent, and he probably has a darker view of the world. As we pick up Season 2, he is reeling.

TVLINE | That action sequence was like Major’s hero moment. How did that all come together? Did you have any inspirations from film?
The thing that was an inspiration when I originally asked [Robert] to do the show was Taxi Driver, when [Robert] De Niro goes to rescue teenage Jodie Foster. He’s having to move through rooms, and it would be very violent. It [is] tough to look at the two things as a direct comparison, as we’re doing broadcast network television and can’t be quite as violent. We knew we were going to push the limit as far as we could on this finale.

TVLINE | The song selection of “Der Kommissar” was so perfect. How did you land on that one?
It just came to me. I don’t think I’d written it in the script, but it occurred to me pretty early. It was probably the third or fourth song I tried in there, and it just felt very right.

TVLINE | Robert Buckley mentioned to me that there was another song at some point. What was the other option?
It was “When Doves Cry.” That was what I had in the cut, and it turns out, a) Prince is very expensive, [and] b) he doesn’t want his music associated with violence. So we were out of luck on a couple accounts there.

iZombie fans, what did you think of the season ender? Which Season 2 teaser has you most excited? (We vote for Blaine and Liv as “strange bedfellows”!) Grade the finale via the poll below, then hit the comments to back up your pick.