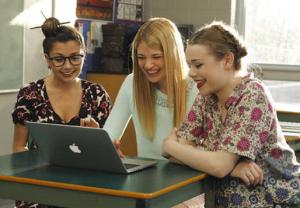 School will remain in session, as the Degrassi kids relocate to a new “home.”

Just days after word broke that the long-running, ever-evolving coming-of-age series would be ending its run on TeenNick on July 31, producer DHX Media Ltd. has announced that 20 new episodes of Degrassi: Next Class (as it will now be called) will debut on Netflix and Family Channel in 2016.

According to EW.com, characters continuing on with Next Class include Deon “Tiny” Bell, Frankie, Grace, Hunter, Jonah, Lola, Maya, Miles, Shay, Tristan, Winston, Zig and Zoe — any or none of whom may be featured in the photo I randomly grabbed above. (I just liked the fact that the girls were ostensibly watching their own show stream on Netflix.)

What, my childhood crush Caitlin isn’t with the show anymore?? Does The Zit Remedy still book gigs? “Everybody wants something, they’ll never give up…..”

Per a press release, Degrassi: Next Class promises a “pull-no-punches” look at “Generation Z… teens as they begin their journey into adulthood. Pushing their own limits and testing the bonds of family and friends, the students each find their own way to deal with a range of issues: from homophobia, racism, substance abuse and violence to burgeoning sexuality, body issues, heartbreak and the complications of dating in the social media age.”

Are you glad to see Degrassi continue on?