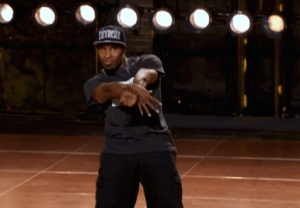 As someone who watches a lot of reality TV, my cynicism-o-meter tends to start beeping whenever I hear an extended voiceover about the power of second chances, the long road to redemption or the final rose of the night.

Fret not, I’ll always have mockery in my heart for The Bachelorette* (AKA Fameosexual Playground), but when it comes to So You Think You Can Dance, I’ve learned to give the eye rolls a rest and simply succumb to the beauty of the art form in front of me — be it tap or krump or “Jit” (Detroit’s homegrown style) or the much maligned Russian folk dance. (*Now being recapped by my colleague Rebecca Iannucci!)

Maybe that’s why instead of shouting, “Learn to take no for an answer!”, I applauded plucky hoofer Gaby Diaz, who got rejected during the Season 12 Dallas auditions, then flew a week later to Detroit, where she bloomed like Paula Abdul’s raw vocals under the studious care of a dozen studio wizards. And in the same vein, the 19-year-old with a violent streak who’s essentially raising her sisters, the handsome krumper who brought his toddler on stage and even the helium-voiced sprite “Bang Banged” their way into my heart over the course of the two-hour telecast.

I know, I know, earnestness is probably the wrong mood for recapping a program executive produced and judged by Nigel Lythgoe — keeping it real, though, I’d have said “Nope!” to both halves of the Vegas-bound engaged couple, and, sadly, to the handsome Jit specialist — so I’ll cut straight to my countdown of Detroit’s Top 5 auditions:

5. Kenya “Standing O” Sutton | I’m not sure the self-proclaimed “Queen of Detroit” possesses all the skills necessary to win Season 12 — she admitted herself that she lacks training — but I liked that she combined grown-woman raunchiness with appealing goofballery during an animation sequence that looked like she had electricity running through her veins.

5. Brooke Fong | Her pirouette actually made it look like she was a figure skater, and I liked that she owned her sexuality, rather than giving Nigel the kind of “oh, gosh golly” coyness he tends to favor.

4. Christine Shepard | The episode’s opening performer came off a wee bit cocky in her pre-performance interview — alas, a much bigger crime for voters when you’re a female contestant — but her speed, her extension and her sense of musicality completely backed up her bravado, no?

3. Miranda Wikling | This kid was lucky enough to have her local audition fall on her 18th b’day, but we were the ones who got all the presents, thanks to an absolutely explosive jazz routine set to a slamming hip-hop score. If she’s got vulnerability in her repertoire, too, she could be a major threat.

2. Gaby Diaz | Genius choice of Dianne Reeves’ “Endangered Species” probably helped her cause, but girlfriend managed to be sensual, playful, powerful and humorous — sometimes all at once — while deftly handling a variety of tap rhythms.

1. Lydell Shannon | Episode-closing krumper lived up to his “beastly but smooth” promise by combining hyper-aggressive gestures with an almost lyrical flow across the stage.

OK, your turn. Who were your favorite hopefuls from the Detroit auditions? Sound off in the comments with your thoughts!