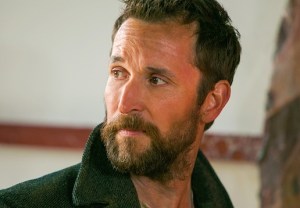 Unlike the 2nd Mass, which over the years has been led into battle by and large by history prof-turned-resistance leader Tom Mason, TNT’s Falling Skies has not enjoyed the best continuity of leadership.

Season 1 of the Steven Spielberg-shepherded alien-invasion drama had Mark Verheiden (Heroes, Battlestar Galactica) as its showrunner. Then for Seasons 2 and 3, Remi Aubuchon, whose resume highlights at the time included Caprica (which he cocreated), The WB’s Summerland and ABC Family’s Wildfire, then took the reins. But before Season 3 even hit the airwaves, Battlestar Galactica vet David Eick was 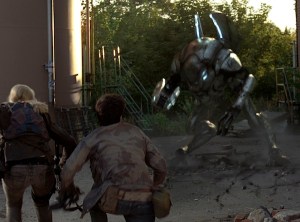 announced as the next showrunner, a position he held for both Season 4 and the series’ farewell run (premiering Sunday, June 28).

Series lead Noah Wyle, who is now an executive producer on TNT’s The Librarians, told TVLine at Turner’s Upfront soiree, “Now that I’m on the other side of it… this has not been the easiest show to do. [That many] showrunners in five seasons is a bit of a record, and you feel that sort of ‘schizophrenia’ in the writing. It’s reinvented itself a couple different times.”

To Wyle’s point: Whereas Season 1 was a Walking Dead-like travelogue about plucky survivors, Season 3 evoked Revolution with its exploration of an ersatz U.S. government. Most recently, Season 4 splintered the 2nd Mass, directing some to a commune that was quietly lorded over by the ever-evolving Lexi, while Tom, Weaver and others were relegated to solitary confinement at an Espheni ghetto. That cycle concluded with Tom and his hybrid daughter trekking to no less than the moon, to destroy their adversary’s power core.

That plan however hit a snag, leaving Lexi to commandeer the Overlord’s ship and embark on a kamikaze mission. Tom meanwhile spun off into space in an aimless Beamer, 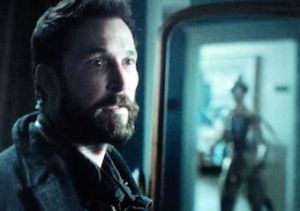 ultimately waking up in the company of a partially seen, omnipedal E.T. whom he deemed “beautiful.”

The series’ fifth season, which was announced as its final run almost a year ago, picks up immediately after Tom’s awakening, Wyle says — and (per TNT’s synopsis) with “all breed of beast and mutant running rampant on Earth,” now that the Espheni’s power source has been unplugged. After four years of being tortured, imprisoned and mutated, and having their loved ones stolen from them, the 2nd Mass is ready to get down and dirty with the enemy in an all-out battle to determine the fate of Earth.

“It’s so rare that you get to script your own ending,” TV vet Wyle notes, “so we saw that as a privilege — like, ‘OK, let’s make sure that we cross all of our Ts and dot all our Is and explain how this whole thing started.'” As such, he says this farewell run is “hopefully a satisfying one.”

“We tried to answer all the questions, to unravel all the mythology, and make it as satisfying an ending for the audience as it was for [the cast] to get our own sense of closure,” he adds.

As a result, Wyle hears that Season 5 (which wrapped filming back in February) boasts “10 of the strongest episodes we’ve ever done.” So “in the final analysis, we finished strong, and I’m proud of it.”

But for the stalwart fighters of the 2nd Mass, some may not live to be a part of that royal “we.”

“We thin the herd along the way,” Wyle hints of the casualties to come. “Not everybody makes it to the finish line.”