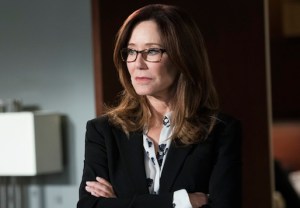 When last we tuned into TNT’s Major Crimes, the insidious Phillip Stroh had resurfaced in the flesh to “make a deal,” only to — being the slithery snake he is — escape into the ether.

MCD Captain Sharon Raydor (played by Mary McDonnell) is thus left to worry for her son Rusty’s safety while also allowing him his independence, a balancing act that will play into the overall theme for Season 4, which kicks off Monday at 9/8c.

Here, series creator James Duff previews the courageous cycle ahead, the aftermath of Sanchez’s suspension, some wild new cases and a few returns.

TVLINE | Hit me up with your Season 4 theme. What is it?
“Courage.” It’s a slow-building theme, and a lot of it plays through the Rusty story and some of it is understated, but it’s about how you find courage to live your life in the face of an existential threat, basically. That’s what Rusty is going to be called on to do, because Phillip Stroh is not caught, and what Sharon is going to be asked to accept, as well. 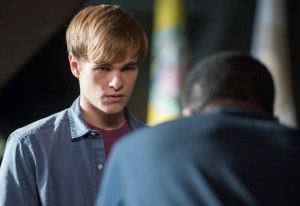 is looking over his shoulder now.
Right, except he is and he isn’t. Yes, he’s been told to be worried of people following him and so he’s reporting it hoping nothing will come of it, but Sharon is accepting that she can’t follow him, so the principal way they’re going to deal with this threat is to face it as if it were everyday life. It takes a lot of courage to do that, to not live with the fear but to choose to live with the bravery instead. Sharon must ultimately recognize that she must face the world as it is and not as she would want it to be.

TVLINE | I feel like Rusty’s finally like looking to the future more so than the past.
And thinking about someone else a little bit, which is part of that the journey out of adolescence. He’s still only 19, so we can give him a bit of room to maneuver and he’s still got a whiff of his traditional arrogance, but he’s moving in a direction where he cares about something other than himself, which is nice to see. It’s the right time for that.

TVLINE | The Sanchez issue weighs heavily in the premiere, and I just want to say: Job well done. A lot of shows will just let their hot head be their hot head with no repercussions, but you actually said “enough is enough” with this guy 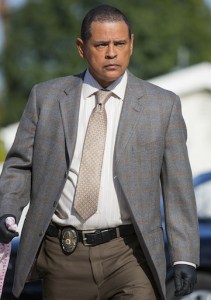 and sent him away to do some work on himself. Are we going to see Sanchez struggle with staying on the right path?
Yes, [in Episode 2] you will see him struggling with the underlying reasons for his anger, and I will say that Raymond Cruz delivers like I’ve never seen him deliver before. He’s always been an amazing actor — don’t get me wrong, he is a terrific presence on film — but his best episode yet may be that one. Of course, we wrote all these episodes before use of force in police departments became an issue; I don’t want people to think I’m hopping on board a trend, because I’m not. The LAPD operates under extreme discipline, and it all stems from the Consent Decree under which the department labored for, I think, almost 15 years. They are very well trained in dealing with excessive use of force and they don’t tolerate it as much as other [cities’] departments do. But we were breaking these stories before Cleveland and before Missouri(/Michael Brown), so it’s just been very coincidental that all that happened, and now we’re in the aftermath.

TVLINE | You’re not reactively holding up a mirror to society.
I’m not against holding up a mirror to society, but I don’t like to be so obvious about it. It takes some courage to come back after you’ve been disciplined like [Sanchez has] and everybody knows what your problem is, and not everybody wants you back to begin with. Flynn’s response to Sanchez is very typical when he says, “I want to be worried about catching the criminal and not that the cop next to me is going to explode.” That’s a very genuine response that you will find a lot of professionals giving; nobody wants to be sued again. So Sanchez is going to be facing his demons and he’ll be releasing some of them in our second episode in an amazing scene that left me… well, I had no idea he was going to be that amazing.

Also, I think Provenza’s going to need courage to move forward in his new relationship…

TVLINE | It’s the same relationship from last season, right?
Yes, with Patrice (played by A Different World‘s Dawnn Lewis). And Flynn is going to need courage to move forward in his relationship. And Rusty may be dating; he says he’s not but everybody else seems to think he is, and it’s making him really irritated. There are lots of relationship issues this year.

TVLINE | Can you tease some of the cases you have coming up this season?
We have a murder that begins with a car chase, where at the end the owner of the car pops out of the trunk dead, so you’re trying to identify the killer. We have the Alice story [about a missing young woman], which goes on for the first 10 episodes, and there is a digital platform [online] epilogue that follows Rusty’s search for Alice. Buzz tells him there are lots of ways to tell a story these days, so Rusty starts a blog called Identity and it has 10 digital components.

TVLINE | Oh that’s cool, very organic. Do any of the other cast pop up in the digital shorts?
Yes, they do. Brandon [Barash] pops up as Detective Robbie Oderno in the second installment, because the first installment is just Rusty at his laptop telling Alice’s story – before he gets a lot of grief from people who watch it and he moves to make it more interesting.

One of our favorite stories this season so far is Buzz becoming a reserve officer, doing his first ride-along with Flynn and Provenza and stumbling across what might be a murder, at one of the most expensive weddings in Los Angeles. His doggedness in trying to push everybody to do the right thing interferes with fireworks at a Dodgers game! There’s an old kidnapping that gets reopened and Tao uses footage from a city block to recreate the moment of the crime. Also, Tao in Episode 3 inadvertently infects the Internet at the LAPD and it all has to be shut down. That’s a very dark case involving people hacking into laptop cameras and spying on women, which the FBI says is the No. 2 focus of crime in Los Angeles, right now.

TVLINE | Are there any family members we’re going to be meeting or revisiting?
Yes — not in the summer but in the winter you’ll be seeing the return of [Sharon’s son] Ricky, and maybe the return of [her daughter] Emily. We’re still thinking about whether or not Tom Berenger should return [as Jack], considering the implications.

TVLINE | I know the S.O.B. spinoff is no longer on the table, but will Jon Tenney be back as Fritz?
Yes, Jon Tenney will be in Episode 7, when we have two officers shot to death during what looks like a routine traffic stop.

TVLINE | And any other guest stars of note?
Malcolm-Jamal Warner will be back, of course; you saw him in the premiere. And you should look for a return from other recurring characters. I mean, if you’ve seen them before, there’s a likelihood that you’ll see them again — people like Jeri Ryan (as high-powered attorney Linda Rothman).