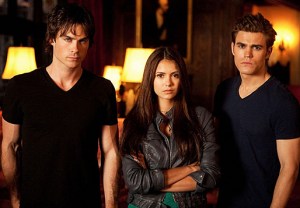 Vampire Diaries masterminds Kevin Williamson and Julie Plec convened at the ATX Television Festival on Sunday to reminisce about their 15-year working relationship — and ended up dropping some serious gems for TVD fans.

Here are seven of our favorite revelations, both about the CW drama’s history and what’s still to come.

* Williamson initially balked at the idea of making a show based on LJ Smith’s Vampire Diaries books; he wanted to make something that was more Dark Shadows, less Twilight.

* The show looked very different in its early, pre-pilot days. While figuring out what it was going to be, Williamson and Plec even toyed around with the idea of a gargoyle that comes to life. (Editor’s note: This is all I can think about.)

* Everything really started to click for Williamson, specifically the show’s voice, while he was writing one of Stefan’s monologues in Episode 2 of Season 1.

* The decision to have Damon (temporarily) kill Jeremy at the top of Season 2 was born because the producers realized he’d become “too heroic, too quickly.” This allowed them to slow that process down.

* Plec spoke with Chris Wood (Kai) about becoming a series regular, but it was their mutual decision to keep him an irredeemable villain.

* By now, we’ve all heard about a “darker” Damon in Season 7, but as Plec explains, he’s simply going to have the “freedom to be messier with his choices” without Elena.

* Following the departure of Nina Dobrev, Season 7 is also going to explore a concept Williamson believes the show has always been about: “finding family.”

Your thoughts on these (mostly) new nuggets? Drop ’em in a comment below.