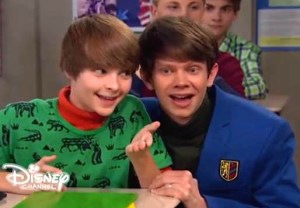 It’s a question as old as time itself — or at least as old as Girl Meets World‘s June 2014 premiere: Which original Boy Meets World character mated with Minkus in order to spawn Farkle?

The answer is coming later this season, and according to creator Michael Jacobs, the mysterious Mama Farkle is someone fans of the original BMW series should be very familiar with.

“You have seen her a number of times [on BMW],” Jacobs told TVLine on Thursday at the ATX Television Festival. “She’s the last person you would believe is married to Minkus. She will be radically different and evolved, and I believe you will love the reappearance of this character.”

When pushed to elaborate on the actress in question, Jacobs said, “She was so happy and proud. She did a couple of episodes for us [on Boy Meets World]. She asked, ‘Was I indelible to you that way?’ And I said, ‘Absolutely.’ She is to [the viewers], too; you’ve just forgotten.”

In the meantime, fans can look forward to the Girl Meets World debut of Shawn’s half-brother Jack (Matthew Lawrence), and star Rowan Blanchard can’t wait for fans to see his long-awaited reunion with Cory’s brother Eric — as well as get some “closure” about Jack’s girlfriend Rachel.

“Jack’s storyline is mainly with Eric, which is cool, because they were best buddies on Boy Meets World,” Blanchard teased. “The whole Rachel situation definitely comes up, and you’ll get some closure on that. … We want to have her back at some point, but she doesn’t appear this season.”

So… Any theories about the identity of Farkle’s mystery mom? Drop a comment with your best guess below.