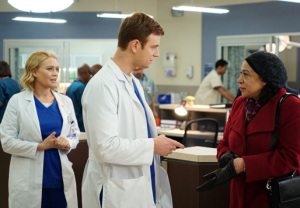 NBC’s fall schedule will get a healthy dose of Chicago Med after all.

Per NBC, George’s real-life pregnancy has led to a “revised” production schedule, one that precludes it from debuting this fall.

Chicago Med — which leads into Best Time Ever With Neil Patrick Harris (and then, starting in November, Chicago Fire) — will air opposite NCIS: New Orleans, Agents of S.H.I.E.L.D., Scream Queens and iZombie.