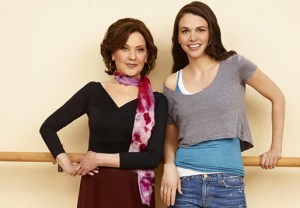 It’s been two years and four-ish months since the ladies of ABC Family’s Bunheads danced their way off of our screens (though never out of our hearts). So, what are the former residents of Paradise up to now?

That was one of the many questions fielded by the show’s creator Amy Sherman-Palladino, who was joined by three of its stars — Sutton Foster, Kelly Bishop and Stacey Oristano — on a panel at the ATX Television Festival on Friday.

“It was about dance and it was about teaching and it was about all these things I felt so passionately about … so it was a no-brainer,” Foster said of agreeing to play Michelle Simms, a part Palladino demanded she play after seeing her in Anything Goes. “I never wanted something so bad, and I worked really hard. It was one of the greatest experiences of my life.”

THE TAP-OFF THAT ALMOST WAS | While Michelle’s relationship with Fanny (Bishop) was arguably the heart of the series, her antagonistic banter with Oristano’s Truly — who carried an eternal torch for Michelle’s late husband Hubbell — also made their relationship a fan-favorite. But here’s a fun fact: it almost never happened. 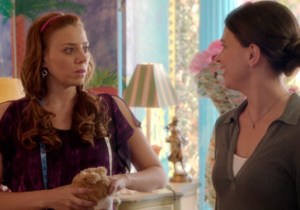 “I didn’t actually audition for Truly,” Oristano revealed to stifled gasps from the audience. “I went out for her best friend. So I did two auditions with that, then a crazy crazy dance call and — bless Amy’s heart — after five hours at that dance call, Amy goes, ‘I think she can read for this other part.’ I was like, ‘Oh my God, yes! Please! Does that mean I get to stop dancing?'”

Speaking of which, Oristano spilled, “Amy actually got mad at me one time because she didn’t know I’m a tap dancer.”

Added Foster, “We were pitching … a duet, a tap-off between [Michelle and Truly].” Sadly, it was not to be.

FORMING THE CORE FOUR | In addition to having to find the perfect actors to play her main four girls, Palladino said, “I needed a specific body type for each girl, because it was a part of the story. I wanted them to be going through something where a lot of their success was dependent on their body type. So I needed Sasha, who had to be beautiful, look like that ballerina, have that classic body type, have the technique and be able to do it, because she was the one who could do it all and didn’t give a s–t. I needed Boo, who had to not have the body type … but she had to have the technique. That was particularly difficult because I needed a rockstar dancer, someone who had it all, except she’s not two pounds. And thank God we found Kaitlyn [Jenkins].” 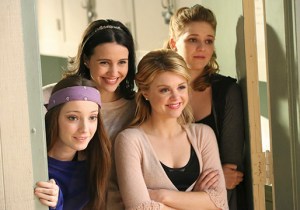 She continued, “Then I wanted someone very tall and lean [for Melanie], and I wanted someone with big boobs [for Ginny]. Of course, the minute I cast adorable little Bailey [De Young], she goes on a diet, and the first place she loses weight was in her t–ts. … I’m like, ‘What happened to her t–ts?’ Sometimes the first thing that goes is the boobs.”

WHERE ARE THEY NOW? | “I think Michelle definitely stayed in Paradise,” Foster said when asked about her character’s current whereabouts. “She really found a home there … with unexpected relationships and an unexpected family. I think it would have been nice for her to have found love, so that’s something we didn’t get the chance to delve into in that season. She had a fun fling with [Nathan Parsons’] Godot, which was fun, but the closest thing she had to love — in a weird way — was with Hubbell and Fanny. She found love and family with her, but it would have been nice to see her in a relationship.”

As for whether or not Fanny likely remained at the dance studio, Bishop didn’t hesitate before saying, “Yes, she would go on until the very, very end. … That is a dancer’s life. With dancers, I feel like it’s kind of a given that you pass the torch by teaching other people to dance. This is a completely natural thing for Fanny. I imagine that if Michelle found love, Fanny would be mad at her for being disloyal to Hubbell, or something really twisted like that.”

And Truly? “I think she marries [Scotty],” Oristano said. “She had such a crush!”

Ultimately, Palladino said she didn’t bother making too many plans for the show’s future, since the writing was on the wall long before word of the show’s cancellation finally came down from the network.

“We had some ideas, but we knew,” she said. “When you’re on a network that revolves around 13-year-old girls who haven’t menstruated yet, it’s tough to continue stories about life and emotion. It’s not really [ABC Family’s] game. Maybe that game will change, but at the time, they didn’t know what to do with us.”

Added Oristano, “We didn’t have the word ‘liars’ in the title.”

Bunheads fans, what are your favorite memories from the 18-episode series? Drop ’em in a comment below.