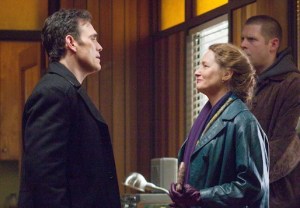 Fresh off Pope’s cold-blooded murder (and subsequent “disappearance”), Ethan and his shaken family return to their house, where they find… a crisp new blazer for Ben to wear to his first day at Wayward Pines Academy! (Note: My son stayed home from school recently because of a dull headache; Ben just saw his father shoot a man, whose body then got dragged behind an electrified perimeter fence by a goblin or something, but learnin’ is learnin’!)

The next day, while Ben is off getting grilled by his teacher Mrs. Fisher about what “home” is/isn’t (as well as having his father’s character called into question), Theresa takes a stroll through town, where she comes face to face with Kate. As a hand-carved music box (ostensibly) drowns out their conversation for 30 seconds, Theresa explains that she left the Secret Service to focus on her family, who Kate then “hurt” by having an affair with Ethan. Kate visibly registers her guilt, but argues, “A lot has changed since then — you just don’t know it.”

Newly (and quite immediately!) installed sheriff Ethan meanwhile discovers beneath his desk a hidden cache of files, detailing the residents and who/what they were before Wayward Pines. After Peter McCall is hauled in for defacing public property — in his reckoning-eligible “third strike,” he spray-painted, “In a time of universal deceit, telling the truth is a revolutionary act” — Ethan presents the man with his file. Perusing the very sleek folder’s pages, Peter’s past eventually bubbles back to the surface: He was on a business trip to Los Angeles in 2001 when he hooked up with a stranger, Denise. After carousing and then blacking out in his hotel room, Peter woke up in Wayward Pines — and “Denise” was now the noticably older Nurse Pam.

When Ethan suspects that Mayor Fisher (aka school teacher/former hypnotherapist Megan’s husband) might want to spill some town secrets, Theresa arranges a dinner date for the four of them. At the local beer garden, the mayor discreetly confides in Ethan that “they” focus on the kids, that it’s “all about shaping the mind of the child.” When the wives rejoin the men, Ethan abruptly brings up the reckonings; Megan contends that they don’t make the laws, merely follow them.

Nurse Pam interrupts the restaurant revelry to toast the new sheriff, who she hopes will “swiftly and severely” punish those who deserve it. Ethan jumps in to attest, “I will do all in my power to see that evils are brought to light, that the true criminals are brought to justice.” On the way home, he and Theresa bump into Dr. Jenkins, whom they ask about the need for reckonings. “Sometimes the best things require the greatest sacrifice,” the odd man posits.

As Episode 4 of 10 nears a close, Ben finds a new friend in classmate Amy, Theresa is mysteriously offered a recently vacated (hmmm…) Realtor job and Ethan plots to hide Peter from those who demand him dead. But after questioning the purpose of the fence (Is it keeping them in, or something out?) and then showing Ethan the “one way out” of Wayward Pines (up a tall, steep rock face), Peter declares, “This is the end for me” — and then lobs himself onto the electrified fence.

Returning home, Ethan tells Theresa to stay put and “play along” while he goes to get help. Stopping at the cop shop for provisions and such, he bestows the job of sheriff upon an all-too-amenable Pam, and then heads out to scale the cliff… where at the top an eerie, pale being spies him from behind a tree….

What did you think of this week’s episode? What are your new theories? (What if I told you that what Ethan found last week in the warehouse, coupled with what’s beneath his desk and something Peter said, points to one of the big secrets?) Regardless, next Thursday you’ll get sooooo many answers, one of which I absolutely did not see coming.