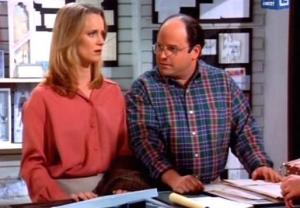 Seinfeld‘s Jason Alexander is mastering his domain — in the art of the backpedal.

The actor on Thursday morning apologized for and attempted to clarify remarks he made on Howard Stern’s radio show Wednesday recollecting the classic NBC sitcom’s decision to kill off George Costanza’s fiancée Susan, played by actress Heidi Swedberg.

“She’s a terrific girl. I love her. I couldn’t figure out how to play off of her. Her instincts for doing a scene, where the comedy was, and mine, were always misfiring,” Alexander told Stern, adding that well into her arc, Swedberg finally shot an episode with extensive scenes opposite Jerry Seinfeld and Julia Louis-Dreyfus. “They do the week…and they go, ‘You know what? It’s f—ing impossible. It’s impossible.’ And Julia actually said, ‘I know, it’s just, don’t you wanna just kill her?’ And [executive producer] Larry [David] went, ‘kebang!'”

Ultimately, Swedberg’s character died after being poisoned by licking the glue on the couple’s low-quality wedding invitations.

Alexander’s followup Tweet noted that he felt “officially awful” for his remarks. “I retold a story I had told years ago about my personal difficulties and insecurities in playing George against the Susan that Heidi Swedberg created. The impetus for telling this story was that Howard said, ‘Julia Louis Dreyfuss told me you all wanted to kill her.’ So I told the story to try and clarify that no one wanted to kill Heidi,” he wrote.

“And again I say, I and the cast really liked and like Heidi. She is a kind, lovely person who undoubtedly worked really hard to create Susan and that character was clearly what Larry and Jerry wanted her to be for George. I just felt I was on uncertain ground in how to play off that character and I was always concerned that it wasn’t working. And that’s what I would voice concern about. But because the scenes were playing the way they were, the relationship with George and Susan sustained a whole season. People clearly liked the interplay even though I believed I was ‘off.'”

Alexander added that he feared his remarks on Stern placed “a heavy burden” on Swedberg. “She was generous and gracious and I am so mad at myself for retelling this story in any way that would diminish her… To Heidi, I personally apologize. You are a sweetheart. I actually launched into this on Stern to defend you. But this is why I’m not a lawyer. Now everybody, calm down and just enjoy the reruns and think, ‘Why did he think this wasn’t working? This is great.'”

What do you think of Alexander’s apology? And did you enjoy the George-Susan dynamic back in the day? Sound off below!