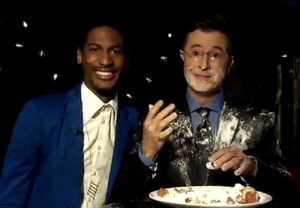 Here’s something you can cross off your long list of questions surrounding Stephen Colbert‘s upcoming Late Show takeover: Who will lead his band?

“His music makes the audience feel so good, we may have to install a ‘Do Not Make Love’ sign,” Colbert said in a statement, while Batiste added, “I’m thrilled! This is a match made in heaven. Get ready for a love riot in late night.”

Below, watch Colbert introduce his new bandleader (and scarf down some delicious-looking beignets). The Late Show With Stephen Colbert kicks off Tuesday, Sept. 8, on CBS.

* What do Mark Cuban, NASCAR and the Lincoln Memorial have in common? They’re all featured in the latest Sharknado 3: Oh Hell No! teaser, embedded below for your viewing pleasure.

* Nick Searcy (Justified) has made a date with Hulu’s 11/22/63, its upcoming event series based on Stephen King’s novel of the same name. In the drama — which follows Jake Epping (James Franco), an English teacher who travels back in time and attempts to stop JFK’s assassination — Searcy will play Deke Simmons, a high school principal and Jake’s boss in the 1960s life he assumes.

* Rob Riggle (The Daily Show) will guest-star on Season 2 of USA Network’s Playing House, per The Hollywood Reporter. He will play Buck Finch, a woodshop teacher whose double entendres about working with wood get the ladies-only class, um, excited.

* The Big Bang Theory‘s Jim Parsons will make his first appearance on Inside the Actors Studio on Thursday, June 18, at 8/7c.

* Starz has released a behind-the-scenes video of its upcoming comedy series Blunt Talk, premiering Aug. 22 at 9/8c. Starring Patrick Stewart (X-Men, Star Trek: The Next Generation), the series follows Walter Blunt, a British import intent on conquering the world of American cable news. Check out the video below to see the stars give insight on their fictional “dysfunctional family.”