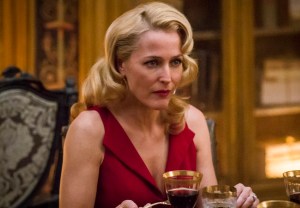 “I’m trying not to eat anything with a central nervous system,” says Gillian Anderson’s Bedelia Du Maurier, quite somberly, midway through the Season 3 premiere of Hannibal.

But when you’re living under the same roof as the show’s terrifying titular sociopath/culinary artist, how would you ever really know what’s going down your gullet?

In much the same way as Anderson’s deliberately cadenced alter-ego spends the hour in a beautifully hazy nightmare — is she a murderer now? a future victim? a psychiatrist conducting the ultimate observational study? — Hannibal‘s audience must also juggle tough questions along with macabre and stunning imagery.

I’m not sure I’ve got answers to any of these queries — you can’t drop your pasta in the pot ’til it comes to a boil, if that makes any sense— but I will admit I was completely under showrunner/provocateur Bryan Fuller’s haunting spell before Dr. Lecter’s first chilling “bonsoir.”

[Side note: Is there a more hideous end-of-a-hard-work-day scenario than that of Dr. Fell’s wife, coming home and finding Mads Mikkelsen’s decked-out serial killer feasting on her hubby, and pretty much knowing she’s what’s on the menu for dessert?]

Anyhow, before I create any more unwelcome crossroads between Hannibal plot points and our own home lives, let’s jump into the Season 3 premiere’s central story arcs and the key questions surrounding ’em. 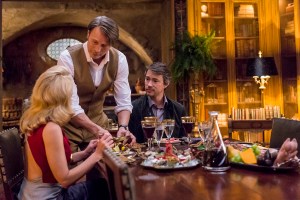 MEET THE FELLS | The episode opens almost wordlessly, with a horrific orchestral soundtrack that conjures up the swarming of insects. And what to our wondering eyes should appear but Hannibal, all in black, riding a motorcycle through Paris, his helmet giving him the appearance of a particularly menacing bug. He’s come to stalk, kill and assume the identity of a Professor Fell — which immediately makes me think of Anderson’s The Fall — but before he does his deed, he engages in some flirty intellectual chatter with Fell’s former assistant Anthony Dimmond. The scene (and the entire hour) is littered with visual double-entendres — a sword is drawn and violently slices… a champagne bottle — but the men eventually split (while the Fells part ways… with several tasty organs).

We jump ahead to Hannibal and Bedelia’s life in Florence. He’s teaching, she’s visiting seriously creepy food purveyors — raise your hand if you’d immediately flee any shop in which dead, trussed bunnies were dripping blood from their muzzles — and (whoops!) Dimmond has dropped by to visit his old boss. Hannibal cuts him off at the pass — explains that the new curator and translator at the Palazzo Caponé (whom he happens to be impersonating) is out for the day, and extends a potentially deadly invite to Dimmond (who still thinks Hannibal’s name is Yakhov): “My wife and I would love to have you for dinner.”

The main course, of course, is dread — has Hannibal brought Dimmond into their home because he’s the one person who can expose his and Bedelia’s assumed identities? — and Anderson flawlessly walks the line between extreme nausea and grim self-preservation. As much as her instinct tells her to yell “Run, dude!” she’s in so deep that her only outlet is verbal sparring. “Dante wrote that fear is almost as bitter as death,” says her “hubby.” Bedelia’s response — “Dante wasn’t dead when he wrote it” — feels like something that might drunkenly percolate from a spouse who’s been sitting on decades of resentment from listening to her ponderous professor run off at the mouth. (Loved Dimmond’s dropped detail, BTW, that Bedelia’s meat-free mix of oysters and acorns and masala was what the ancient Romans fed to animals to improve their flavor!)

Days later, the jig is finally up, when Dimmond attends Hannibal’s public dissertation (promoted by a testy Italian intellectual who doesn’t buy his credentials). But the young academic seems more turned on than appalled by whatever means Hannibal used to assume Fell’s identity. “Clearly, you found him as distasteful as I did,” he smiles. Which prompts the most LOL retort of the hour (delivered mouth-wateringly by Mikkelsen): “On the contrary.”

Soon after, we see Bedelia preparing to leave their Florence flat — and yet isn’t it funny she hasn’t made her exit until Hannibal arrives with Dimmond? (I mean, if you really wanted to flee, would you take time to pack your tailored suits and hats?) Moments later, her face is getting splattered with blood — Dimmond’s blood — as Hannibal hits the curious fella with a marble bust. As the victim crawls for the exit — in shock, but with his “flight” mechanism fully activated — Hannibal and Bedelia have an exchange that sounds like the world’s darkest  doctoral thesis. “You say you are observing, but this — is participation, Bedelia,” Lecter coos. His “wife” finally admits she’d let the scenario play out in her mind beforehand — and that Dimmond’s demise was exactly how she’d envisioned it. The final step — Lecter snapping his victim’s neck — is a foregone conclusion, and Lecter’s followup is pretty much the working question for the entire premiere: “What have you gotten yourself into, Bedelia?”

The episode ends with an image that’s hard to decipher. Are we looking at a sculpture? Candle wax? A side of beef? No, it’s a torso on an easel — what part of Dimmond got eaten, you’ve got to wonder? — displayed at the exact same locale Dr. Fell discussed Dante’s Inferno. Oh, what fresh hell our victim visited this time! 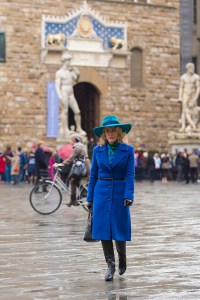 BEDELIA’S DILEMMA |  So much of what Bedelia says to Hannibal during the hour sounds more like she’s talking to herself, trying to convince herself she hasn’t crossed the line into sociopath-adjacency. “I still feel as though I am in conscious control of my actions,” she says to Hannibal early in their Florence sabbatical. “Given your history, that’s a good day.” And yet there’s a scene where Bedelia sinks into a bathtub — eyes closed, descending down, down, downward in a way that’s equal parts symbolism and just gorgeous cinematography — that tells us how conflicted she’s become.

There are also a couple of juicy flashbacks that help us understand how Bedelia got here. After her Season 2 interview with Crawford — in that fierce red dress — she returns to her closed-down abode and finds Hannibal showering off Will, Jack, Alana and Abigail’s blood. She’s wise enough to pull a gun on the (surprisingly ripped) fugitive, but when she sets it down, she admits it’s a mix of greed (she wants to observe!) and blind optimism (that he won’t kill her) that will fuel her future actions. (Speaking of the Season 2 finale, we don’t see Will, Jack, Alana or Abigail, or learn which of ’em lived, died, or are destined for flashback/fantasy sequences.)

We also get a flashback of Bedelia’s first killing — that patient of hers whom we’d heard last season was under Hannibal’s influence. Still, does self defense require you to put your hand down the perpetrator’s throat? I suspect not. It’s Hannibal who gets her off the hook: “I can help you tell the version of events that you want to be told,” he whispers, and Dr. Du Maurier not-too-reluctantly accepts — setting in motion the eventual European Vacation of Her Nightmares (TM pending). (Bet “watches murder in Florence” was not on the travel agent’s itinerary!)

WILLING AND ABEL | The Season 3 premiere also includes gross-out black-and-white flashbacks to Hannibal’s slow and deliberate filleting and cooking of Eddie Izzard’s Abel Gideon. I’m not sure if there’s a deep signifcance here, or if it was just a chance for Mr. Fuller to show artsy images of snails feeding on a dismembered human leg. Still, Gideon’s query — can Hannibal tell the differences in human meat when he’s adding ingredients like candy apples and thyme? — is hurl-inducingly interesting (doctor, consume thyself!). And his parting shot to Hannibal — “How will you feel when this all happens to you?” — feels like foreshadowing, even if the query is probably more metaphorical than literal.

On that note, I turn it over to you. What did you think of Hannibal’s Season 3 premiere? Take our poll below, then sound off in the comments!