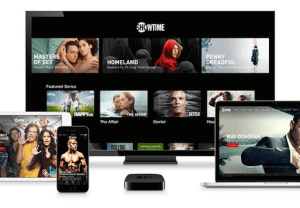 Starting July 12, you’ll be able to enjoy your Masters of Sex-ytimes via the Internet. And with no strings attached (to a cable provider, that is).

Showtime on Wednesday announced the launch of, well, Showtime, a stand-alone streaming service by which viewers can enjoy every episode of every season of the pay cabler’s original series, but without a cable subscription. Instead, you can pony up $10.99 per month to access the Showtime service using any Apple device. (Additional platforms and providers will be announced at a later date.)

Subscribers to the Internet service can also watch new episodes live, as they are broadcast to the east and west coasts, as well as have unlimited on-demand access to hundreds of hours of movies, documentary and sports programming.

“We’re excited to offer consumers the opportunity to subscribe in new ways, by simply having an Internet connection,” Showtime Networks CEO Matthew C. Blank said in a statement. “Our intent is to make Showtime available to viewers via every manner possible, giving them an enormous amount of choice in accessing our programming, starting with the season premieres of our award-winning series Ray Donovan and Masters of Sex,” both of which launch new seasons the day the streaming service goes live.

Showtime is offering a 30-day free trial to new customers who sign up through Apple in July. Subscribers can use their Showtime account to watch the service across all supported devices, as well as Showtime.com.