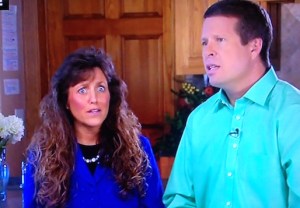 19 Kids and Counting stars Michelle and Jim Bob Duggar are under an “unprecedented attack” by the media and want to become advocates for protecting the contents of sealed juvenile records.

Those were two of the messages the reality TV stars hammered home to Fox News anchor Megyn Kelly in a Wednesday night interview regarding allegations that, as a teenager, their son Josh molested five underage girls — including four of his sisters.

Still, while much of The Kelly Files‘ sitdown at the Duggar family home in Arkansas centered on the couple’s actions in the days, weeks and months following Josh’s confession that he’d “inappropriately touched” minors on at least five occasions, it was Michelle’s end-of-the-hour assessment of the scandal that was perhaps the most surprising.

“They’ve been victimized more by what has happened these last couple weeks than they were 12 years ago,” she said of daughters Jill and Jessa (now 24 and 22 years old, and who’ll appear on Kelly’s Friday broadcast) and Josh’s three other unnamed alleged victims. “Because they didn’t even understand or know that anything had happened until after the fact — when they were told about it.”

The Duggars repeatedly claimed that none of Josh’s victims “were aware of [his] wrongdoings” — and reiterated multiple times that it was Josh who came to them and reported the molestation, several instances of which allegedly occurred while the girls were alseep.

The interview took place as the fate of 19 Kids hangs in the balance; TLC yanked the show from its schedule when the allegations of Josh’s crimes came to light, but has yet to officially cancel it.

If a full hour of “Duggars in Defense Mode” fills you with nameless dread, here are some more takeaways from Kelly’s Q&A:

* The Duggars said that Josh first confessed to fondling underage girls when he was 14; a subsequent admission of sex abuse at 15 prompted them to speak to close friends, then reach out to “a man who mentored young men — and he really helped young men who made unwise choices in their life to get straightened out.” Josh was sent to live with the mentor and undergo Christian counseling, but the couple did not contact police because “as parents, we are not mandatory reporters,” Jim Bob added.

* Upon returning home, Josh “asked God and asked those he offended” to forgive him, Jim Bob explained, calling their decision to send the teenager to live with a mentor “the best decision we made through this whole process.” Pressed by Kelly about whether they feared their son might relapse and commit further abuse, Michelle noted they’d “put safeguards in our home” — including not allowing boys to babysit, not allowing boys and girls to run off together during games of hide-and-seek, and making sure children are always “out [and] visible.” Furthermore, “little ones don’t sit on big boys’ laps, or people you don’t know, or even family members, unless it’s your daddy,” she added.

* The Duggars also said they brought Josh to the nearest outpost of the Arkansas State Police — Jim Bob admitted he “knew a lot of the officers around here” from his towing business — where their son confessed his crimes to “a man” who “put the fear of God in Josh.” They claim they remained uncertain for months later if Josh might be arrested. Michelle added that subsequently, “all of our children received professional counseling — including Josh, who paid for his own counseling himself.” Kelly did not press for further details about the length or intensity of the counseling, or ask if the Duggars ever questioned whether or not to keep adding to their massive brood after learning such terrible acts had occurred in their home without their knowledge.

* The Duggars said they had no qualms about launching a reality TV career — and inviting cameras and scrutiny into their lives — with the abuse scandal tucked away in their closet. “All this had been taken care of five years before,” said Jim Bob. He added he hopes that with the knowledge “God can forgive [Josh] for these terrible things, I hope other people realize God can forgive them and also make them a new creature.”

* When Kelly asked about whether Michelle felt hypocritcal, “knowing what you know about Josh,” for having recorded a robo-call comparing transgender people to child abusers, the Duggar matriarch deflected, stating, “I think that protecting young girls, and not allowing young men and men in general to go into a girls’ locker room, is just common sense.” Jim Bob then went on to differentiate “child molester” from “pedophile” — arguing “Joshua was actually 14 and just turned 15… a child preying on a child.” When Kelly rephrased the question, Michelle said “this is more about… there’s an agenda, and there’s people that are purposing to try to bring things out and twisting them to hurt and slander.”

* The couple also questioned why the media has not investigated more thoroughly how Josh’s sealed juvenile record was released to In Touch magazine, which first broke the abuse story. Whatever the fallout, though, even a possible cancellation slip for 19 Kids, Jim Bob said “we are fine whether they film us or not.”

* Kelly also teased Friday’s broadcast (9/8c on Fox News) in which Jill and Jessa will discuss how they’ve handled the public revelations about their alleged abuse.

What did you think of Jim and Michelle’s sit-down? Were there additional questions you’d have liked Kelly to ask? And did the Q&A do anything to change your feelings on how TLC should proceed with 19 Kids‘ future? Sound off below!