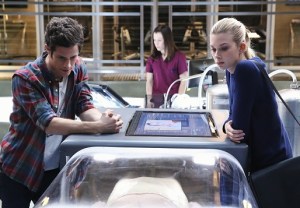 ABC Family got into the murder-solving business on Tuesday night with the premiere of Stitchers, a slightly fantastical new drama about hacking into dead people’s memories. But will you return for the next case of “stitching”?

Before you chime in with your thoughts, here’s a brief summary of the episode: Cal Tech student Kirsten Clark (played by newcomer Emma Ishta) is — how do I say this nicely? — not the warm-and-fuzzy type. Her relationship with her roommate/classmate Camille (Warehouse 13‘s Allison Scagliotti) is frosty at best, especially after Camille accuses Kirsten of sabotaging her project and gets her suspended from school.

But there’s a reason for Kirsten’s cold ways: She suffers from temporal dysplasia, which means she has no perception of time. “I use memory, logic and math to approximate a time difference, but I don’t know what time feels like,” she explains. As a result, she doesn’t experience events the way the rest of us do, leading her to come off as emotionless. For example, when she saw the body of her deceased “adoptive” father Ed, ” she felt nothing because “the knowledge of him being dead was instantly familiar.”

While this is a hindrance when it comes to interpersonal skills, it makes her a prime candidate for a top secret subsect of the NSA that hacks into the brains of dead people to access their memories and decipher crimes/mysteries. (Yes, the show’s science requires a healthy suspension of disbelief.) During the “stitching” process, Kirsten’s consciousness is inserted into the deceased’s mind with the help of fast-talking geek neuroscientist Cameron (The Carrie Diaries‘ Kyle Harris) — insert flirty love/hate sexual tension here — and his team. Kirsten then pieces together the clues to stop a bombing — and catches a case of feelings for the first time, thanks to the emotions she experiences from the memories.

There’s also a bigger conspiracy story: Kirsten’s new boss Maggie (Being Mary Jane‘s Salli Richardson-Whitfield) reveals that Ed and her real father were the pioneers of the stitching technology, and Ed’s death was not a suicide.

How you feel about the series will likely depend on whether or not you enjoy procedurals and if you can connect to Kirsten. Personally, I liked how Ishta leaned into the coldness of her character. The interplay between Kirsten and Cameron is fun, even though he feels like he was transported in from another show. And yeah yeah, it’s kind of similar to iZombie (but not really) and Tru Calling. But what did you think? Grade the premiere via the poll below, then hit the comments to back up your pick!