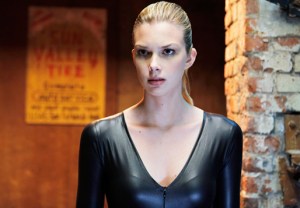 Already a hub for liars, fosters and baby daddies, ABC Family on Tuesday will introduce us to Stitchers (9/8c), a show about a college student named Kirsten who inserts herself into the minds of the deceased in order to solve cases for a secret government agency.

Sounds like a lot to take in, right? We agree, which is why TVLine invited star Emma Ishta to explain the science behind the series — fabricated though it may be — and to dispel a few of the myths.

1. The science, sadly, isn’t real. Ishta’s character is recruited because of her mental disorder, temporal dysplasia, which “prevents her from perceiving the passage of time and disables her from connecting with her emotions,” Ishta explains. “The moment something happens to her, it’s like it’s always been the case.” That said, Ishta also admits the condition isn’t real — even if a certain someone set up a Wikipedia page for it.

2. Kirsten will grow. Despite her seemingly cold nature, Ishta’s character will develop as she stitches herself into more brains. “When she stitches into people, she feels the emotions that they feel, which leaves her with residual emotions,” she explains. “That’ll be a massive part of her journey over the course of the season; to become an emotional being after spending years this way is huge.”

3. Go on, ‘ship away! As you’ll see in the premiere, the chemistry between Ishta and Kyle Harris, who plays Cameron — Kirsten’s stitcher guide of sorts — is electric. “You’ll watch their friendship blossom, and while I don’t think their relationship will develop in the most expected way, it’ll definitely happen in a way people will enjoy,” Ishta teases. As for TV’s general ‘shipping culture, she admits, “I just found out what ‘OTP’ means recently. I had to ask my niece!”

4. Answers are coming. Unlike some shows — which manage to stretch one mystery over, say, six seasons — Stitchers offers instant gratification in terms of answering fans’ burning questions. One major aspect the series will explore is Kirsten’s mysterious past, as Ishta says her character “has very little recollection of being younger.”

5. The water is warm. Because stitching requires Kirsten to be almost entirely submerged in water, Ishta spends quite a bit of time in the set’s giant tank — but she assures us it’s a very humane process. “We have one tank day per episode … and I’d spend upwards of six hours in the water on any given day,” she explains. “You don’t want to drink a lot of coffee in the morning, because then you’ll be getting in and out a lot. And they kept it at room temperature, so I was never cold… but I did get pruney.”

Will you be checking out the Stitchers premiere? Drop a comment with your thoughts on ABC Family’s new series below.