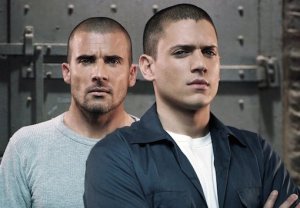 Prison Break may be getting sprung from television purgatory.

Fox is developing a limited-series revival of its 2005-09 drama series that would re-team stars Wentworth Miller and Dominic Purcell, TVLine has learned exclusively.

Details are sketchy, but I hear the reunion project — if it happens — would be similar to last year’s 24: Live Another Day in that it would span a dozen or so episodes and feature a closed-ended storyline.

Earlier this year, Miller — who reunited with former TV bro Purcell this past season on The CW’s The Flash — told E! News that he “floated the idea” of a Prison Break continuation to Fox and “they seemed to think there was something there.” Fox co-chairman Gary Newman acknowledged at the Television Critics Assoc. press tour in January that Prison Break would make “the perfect event series,” but added that there were no current plans to bring the Fox River gang back together.

In the meantime, Miller and Purcell are at least guaranteed to reunite for DC’s Legends of Tomorrow, premiering midseason on The CW.

Reps for Fox and 20th Century declined to comment.

Thoughts on the prospects of a Prison Break revival? Are you, like us, wondering how the show’s EPs will get around the fact that Miller’s Michael is, um, dead? Hit the comments!