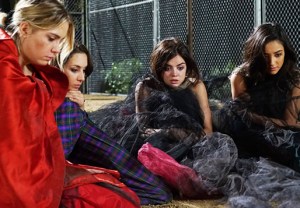 Pretty Little Liars kicked off its #SummerOfAnswers on Tuesday with a season premiere full of… more questions.

Picking up immediately after the events of last season’s finale, the girls remained trapped at Chez Charles, where the dude-but-still-a-bitch entertained them with all sorts of fun games, including dress up (as corpses) and hide-and-seek (or die). Honestly, throw in a bouncy castle and it was basically a reenactment of my 10th birthday party.

BAIT, SWITCHED | Back in Rosewood, Alison remained a helpless (yet glamorous) worm, dangling from Detective Tanner’s hook in the hopes of luring Andrew — suspected of kidnapping the girls, natch — out of hiding. But Ali ain’t about that #WormLife, so with a little assistance from Ezra and Caleb, she snuck out of her house and made tracks for a rendezvous with the hot nerd.

Unfortunately, Andrew was nowhere to be seen upon Ali’s arrival at Tyler State Park. Instead, her car’s built-in “guidance” system — Sleepy Hollow fans, did anyone else immediately yearn for Yolanda?! — directed her to open her trunk, where she discovered a delightful greeting card with an even more delightful message: “Put on these clothes and start walking… or they die.” (For the record, Yolanda would never.) 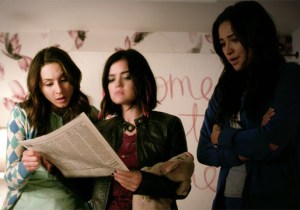 BURNING DOWN THE HOUSE | After three weeks of Charles’ twisted shenanigans, the girls finally reached their wits’ end — take it from me: waking up everyday, wondering if you’re missing a kidney, gets old fast — and decided to torch the damn place. And I was just as surprised as you were when the plan actually worked and the girls managed to escape alive!

It was great to see the liars reunited with their loved ones after enduring so much trauma: Caleb and Hanna (“Don’t ever let me go!”), Spencer and Toby (that kiss!) and Emily and… Alison? That’s right, Emerson ‘shippers, don’t think I didn’t notice that little moment between the former sleepover pals.

¿QUE, SARAH? | But wait! The premiere’s final moments had one more surprise in store for fans: The police entered Charles’ compound and discovered a sixth girl trembling in fear — none other than Sara Harvey, who went missing around the same time as Alison (originally) did. 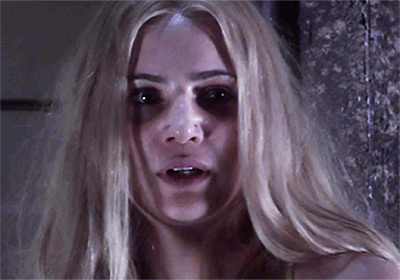 But what’s Sara’s connection to Charles? And while we’re at it, who is Charles? (Here’s hoping the #SummerOfAnswers lives up to its hashtag!) Grade the Season 6 premiere below, then drop a comment with your best/craziest theories.