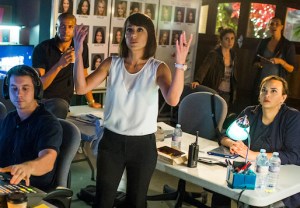 Lifetime on Monday night revealed an UnREAL (yet probably all-too-real) look at the making of a Bachelor-like reality-TV show. Will you make a second date with the freshman drama?

UnREAL stars Shiri Appleby (Life UneXpected) as Rachel, a top-shelf producer who hit rock bottom during her previous stint on Everlasting, the show-within-a-show, by drunkenly crashing its finale, tipping off a finalist that she was about to get dumped and for good measure driving off in the winning couple’s getaway convertible.

Even so, executive producer Quinn (Entourage‘s Constance Zimmer) knows that there are things only Rachel can get done in shaping a gaggle of girls and one Prince Charming into a compelling piece of TV, so she pulls some strings and gets her No. 1 producer back on the team (even if it means having a mousey intern fulfill her community service).

But boy, is Quinn’s gamble worth it. In her first day alone, Rachel 1) coerces Everlasting bachelor Adam (Harry Potter‘s Freddie Stroma) to sign his contract, 2) cleans up the mess when rival producer Shia clumsily coaches/distresses the cast’s resident Virgin (Betas‘ Breeda Wool), and 3) helps ID the Villain of the group.

Rachel also does some “damage,” though, when she nudges Adam to cast off the aforementioned Villain, Britney (Vampire Diaries alum Arielle Kebbel), much to Quinn’s outrage. (To her credit, Rachel then leads Britney to deliver a dramatic on-camera denouement.)

All told, if even 10 percent of UnREAL is accurate — including Quinn’s unabashed penchant for assigning labels to “show pony” Adam and the assorted reality-TV stereotypes among her cast — it casts new aspersion on The Bachelor and its ilk.