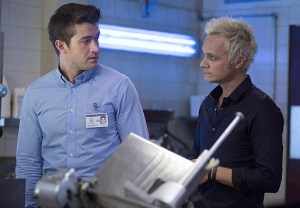 iZombie is offering up a Major dose of drama on this Tuesday’s episode (The CW, 9/8c) as Liv’s ex-fiancé gets dangerously close to brain-dealer-about-town Blaine.

With the stakes raised during the season’s final two installments, star Robert Buckley says he couldn’t have been more pleased when he saw what was in store for his alter ego.

“I was beside myself! I was so happy,” the actor exclaims. “There’s a lot of exciting adventure for Major… I loved the way it turned out.”

So did the rest of the cast, who got a sneak peek at the freshman dramedy’s season conclusion when executive producer Rob Thomas invited them over to his house for a screening of Episodes 12 and 13.

“All of us were like, ‘Holy smokes! Those came out so good!'” Buckley recalls. “Everyone’s in danger, and it just gets crazier and crazier.” (Editor’s note: He does not lie.)

TVLINE | I know it was all in Liv’s head, but do you think any part of Major would react like that if Liv came clean with him?
[Laughs] That’s a pretty ridiculous, crazy confession. I don’t know how anyone would take that. Major was insanely understanding. But he has shown himself to be a very loyal, loving guy. Who knows? If it was me in real life, I might be a bit more stunned. It would take me a little bit longer to get to the, “It’s OK.”

TVLINE | As clever as Major is, he hasn’t figured out Liv is a zombie despite the fact that she’s had a very extreme makeover. Why do you think that is? Is he in denial?
When I was trying to make sense of the character early on, I was like, “How does this make sense?” Obviously, what she went through at the boat party was a very traumatic event. But a huge overnight change… What is it? Is it denial? I think sometimes, when you really love someone, they can become your blindspot. You’re too close to it to see it. Or maybe you don’t want to see it. Subconsciously, you don’t want to acknowledge something.

I also think, because what she went through was so horrific, he can’t really say to her how she should react [or] behave. He’s not able to see the whole picture, because his judgment’s clouded by the fact that he loves her and he still wants to be with her. 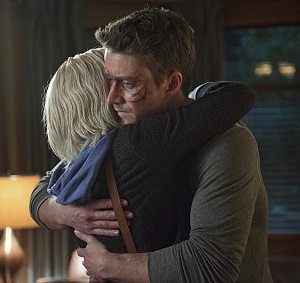 TVLINE | And is Liv open to that? Or is she still in a state of grief over Lowell?
I don’t think that she’s anywhere near ready to get back into a romantic relationship, because nothing’s changed between Liv and Major. She still would be putting him at risk. The whole Lowell thing hasn’t changed that dynamic between Liv and Major.

TVLINE | Last we saw, Major found the brains and was determined to kill all the zombies. What’s he going to do next?
He’s definitely looking for vengeance. Besides the fact that these children are going missing and there needs to be justice served, look what he’s gone through. He’s almost been killed on numerous occasions. So he’s pretty hot in the biscuit, and he’s looking to make someone pay — specifically, zombies.

TVLINE | What are Liv and Ravi’s reactions like, considering how close Major is to the truth?
It’s growing increasingly difficult, especially for Ravi, to keep his mouth shut on the whole issue. What’s going to happen is if they don’t say anything soon, it’s going to be forced anyways, because he’s getting too close and he’s found the brains. So there’s only so much time before the truth is right in front of them all.

TVLINE | From the episodic photos, it looks like Major gets very industrious and finds his way into Meat Cute, so we have our first Major and Blaine scene. What is that interaction like?
First of all, it was a lot of fun to do, because David [Anders] and I really hadn’t had a chance to play much of the season. On the acting side, it was a blast. David is so fun to work with, and he plays the villain so well. And then the scene, it gets tense pretty quick. You don’t really know what Major’s going to do. How desperate or angry is he? And also, we don’t know how Blaine’s going to handle it. Is he going to be ultraviolent? Or is he going to try to get rid of this guy?