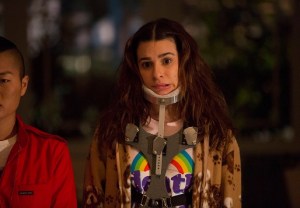 Twentieth Century Fox Television has unveiled its Comic-Con 2015 slate, and it promises to be a fearfest with a joint panel for FX’s American Horror Story and Fox’s upcoming Scream Queens.

Fox favorites Sleepy Hollow, Bob’s Burgers, The Simpsons and more will return to the event, taking place July 8-12, while newcomers Damien (to air on A&E), Minority Report and The Last Man on Earth (both on Fox) and Sex&Drugs&Rock&Roll (FX) will make their first trip to San Diego.

(Among TV offerings, BBC America previously announced that Peter Capaldi will of course be a part of Doctor Who‘s latest Comic-Con visit.)

Twentieth Century Fox Television’s full line-up can be found below:

Damien
From executive producer Glen Mazzara (The Walking Dead, The Shield), this drama follows the adult life of Damien Thorn, the mysterious child from the 1976 motion picture The Omen, who has grown up seemingly unaware of the satanic forces around him.  Haunted by his past, Damien must now come to terms with his true destiny — that he is the Antichrist.  Starring Bradley James (Merlin), Barbara Hershey (Once Upon a Time), Megalyn Echikunwoke (The 4400), and Omid Abtahi.

Sex&Drugs&Rock&Roll
FX’s new comedy series centers on The Heathens, a legendary early-’90s band that was on the brink of becoming famous until they broke up the same day their first album dropped. Many years later, a talented young singer shows up with a desire to be famous and a stack of cash big enough to get the whole band back into the studio. See an exclusive screening, then join creator/writer/director Denis Leary and fellow cast members Elizabeth Gillies, John Corbett, Elaine Hendrix, Robert Kelly and John Ales for a discussion.

Minority Report
Join Stark Sands (Inside Llewyn Davis), Meagan Good, (Think Like A Man) and other cast and producers for a special screening of the sci-fi thriller, based on Steven Spielberg’s feature film, followed by a Q&A.