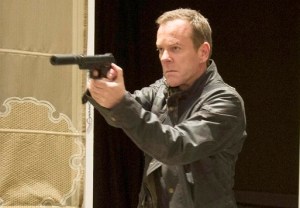 Jack Bauer is passing the stopwatch.

Fox is developing a 24 spinoff that would revolve around a new twentysomething male terrorist hunter, , franchise overlord Howard Gordon confirmed to TVLine Sunday at the Critics Choice Television Awards.

While there are no current plans for Kiefer Sutherland’s Jack to appear, it’s entirely possible his iconic character could pop in and out on a guest-star basis.

The project would find the new male antihero working alongside an older, more seasoned female agent (not Yvonne Strahovski’s Kate Morgan, although she also may also appear). It would also launch as a limited series, similar to last year’s acclaimed 24: Live Another Day, but I’m told the offshoot could easily become a long-term property for Fox.

24: LAD vets Manny Coto and Evan Katz will serve as writers and EPs.

Last month, Gordon told Yahoo TV that the spinoff would maintain the “real-time concept” and that the story “is in the tradition of 24.”