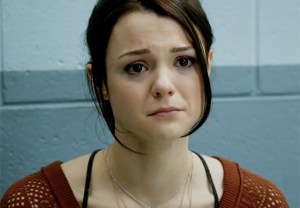 THE PERFORMANCE | One of the brightest young actresses on television, Prescott has always helped set MTV’s Finding Carter apart from the teen-drama herd. And in Tuesday’s episode, easily the sophomore series’ most harrowing hour to date, the London-born actress delivered her most emotional one-two punch yet.

The first punch came during Carter’s heart-rending visit to the psych ward, where her biological mother/kidnapper Lori remained uncharacteristically stoic as a desperate Carter pleaded for her to say, “I love you more.” The audience has never been entirely sure where Carter stands with Lori, partially because of the character’s own uncertainty, but mostly because Prescott excels at concealing Carter’s full emotional deck. So to see her completely implode, her lip quivering uncontrollably as her voice cracked in all the right places, was almost overwhelming.

The second, and far more unexpected, punch came after Carter’s post-visit hookup with Max, her best friend… and her sister’s ex-boyfriend. Hardly any words were spoken, but the flurry of confusion, shame, regret and general exhaustion swirling in Carter’s brain came across so clearly, Prescott might as well have been screaming straight at the camera.

Like her character, who was forced to grow up overnight when she learned that her entire life has been a lie, Prescott possesses abilities far beyond her years.

HONORABLE MENTION | It’s never easy to see a favorite character die, but it’s especially difficult when their portrayer knocks their final scenes out of the park. On Saturday’s Orphan Black, Dylan Bruce did just that as Paul made the ultimate sacrifice in order to do the morally right thing. Whether it was his subtle but impactful confession of romantic endearment to Sarah (“It was never Beth I loved”) or his tearful plea to Dr. Coady (“Cure them, Virginia. Drop the rest”), Dylan had us choking up at the idea of losing Paul — and just as we were finally getting to know the good guy underneath.

HONORABLE MENTION | When we first encountered Chris Diamantopoulos‘ Russ Hanneman in Sunday’s Silicon Valley, the Pied Piper’s deep-pocketed moneyman — having just learned that his net worth had shed a comma — appeared utterly defeated. His trademark cockiness and bravado replaced with humility and regret. Thankfully, Russ experienced a revenue-generating epiphany and quickly snapped back into the hilariously over-the-top Techmanian Devil we have come to know and love, and Diamantopoulos has clearly relished playing. Watching Russ open and close his sedan’s pedestrian door as a means to demonstrate to layman Richard the difference between being a millionaire and a billionaire was a thing of physical-comedy beauty. It also drove home the fact that Diamantopoulos’ career is on full throttle.