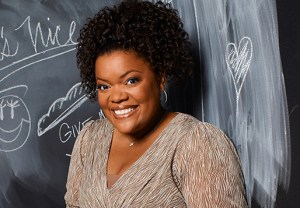 Brown is listed as a guest star in the series’ official synopsis, along with Family Guy‘s Seth Green. Per the episode logline: “As their sixth year at Greendale draws to a close, Abed asks everyone to imagine pitching a TV show about what they would do in Season 7.”

The actress announced her Community exit last September, after which she was cast on CBS’ The Odd Couple — a multi-cam sitcom whose much shorter work hours would allow Brown to care for her father.

As explained in Community‘s Season 6 premiere, Shirley relocated to Atlanta — to be with her own ailing dad — while working as a chef for a paraplegic detective.

Brown told TVLine in March that she would be open to reprising her role, if possible: “It was always a time-spent-on-set issue, not a being-on-set issue. If they were to find a way for me to come back and I wouldn’t have to be there for 16-hour days, I would totally do it, because I love the show, I love my cast members and the crew is awesome.”

Community has not yet been renewed for Season 7.