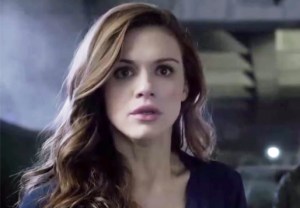 Teen Wolf‘s fifth season promises to change all the rules for Scott and his pack of supernatural misfits. And after getting a first look at the June 29 premiere (MTV, 10/9c), I can promise it’s worth the wait.

And while I can’t give away any major spoilers — the wrath of MTV is far more terrifying than any “Doctor” in Beacon Hills — I’ve been given the thumbs-up to share some of my first impressions from the episode, five to be exact. Ready? Let’s do this:

* Long-suffering Lydia fans, especially those lamenting the scene-stealer’s lack of meaty material in seasons past, will love what the premiere has in store for everyone’s favorite banshee.

* At least one new ‘ship will likely be born when fans watch the premiere — while another existing ‘ship will get some much needed wind in its sails.

* Derek may be gone, but he’ll never be forgotten. He of the Legendary Eyebrows is mentioned several times throughout the premiere, along with another fallen favorite.

* Cody Christian fits effortlessly into the world of Teen Wolf, though it’s unlikely your final opinion of his new character will be formed by the end of the hour.

* Lastly, as always, pray for Stiles.

OK, that’s all I’ve got for now, but TVLine will have lots of Teen Wolf scoop in the coming weeks. For now, drop a comment with your hopes for Season 5 below.