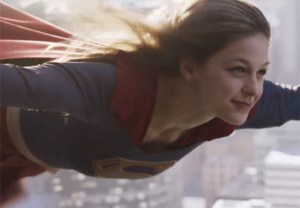 The broadcast networks have more than 20 shows debuting this fall, including reborn Heroes, reanimated Muppets, sexy Scream Queens and comebacks for John Stamos and Rob Lowe. To help you prep for it all, TVLine is offering First Impressions* of the not-for-review pilots.

THE COMPETITION | ABC’s Dancing With the Stars, NBC’s The Voice, Fox’s Gotham and The CW’s Crazy Ex-Girlfriend (new)

THE SET-UP | So it turns out that Kara Zor-El (Benoist) was spirited away from the doomed planet Krypton the exact same time as her cousin, Kal-El. Alas, she got hung up in (non-aging) traffic, arriving on Earth 24 years after he did. Now in her 20s and toiling as an assistant to media mogul Cat Grant (Flockhart), Kara is on the verge of her own “super” coming out party.

THE FIRST IMPRESSION | *First, to be clear: Our Fall TV First Impression series is not officially starting for another six weeks or so. But since Supergirl was leaked/”leaked” so early, it’s ripe for discussion. With that bit of housekeeping hypothetically read and now out of the way…

The series lays out Kara’s out-of-this-world origin in super-quick fashion, focusing much of the pilot on the impetus for her first public display of derring-do and the fallout. There is unarguable joy in seeing Kara dig her heels in, embrace her heroic potential and soar into action; just as she’s not dubbed Superwoman, nor is she some brooding Girl of Steel. As such, visually and tonally, the show is most akin to The Flash, though there is something intangibly… “CBS” about it. 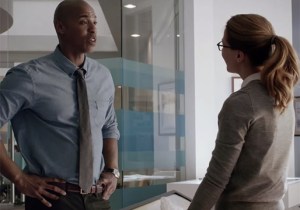 Supergirl’s first showdowns (against guest star Owain Yeoman, The Mentalist) don’t go perfectly, nor should they for a nascent hero. (The proximity of Earth’s sun doesn’t teach hand-to-hand combat, after all.) It all builds to a final twist that spells out the structure of the show, its unexpected Big Bad included.

Benoist is well-cast as moxie-filled Kara, and part of the fun here will be seeing the actress as well as Supergirl grow into their new, respective roles. As Daily Planet transplant James Olsen, Brooks brings a fresh spin to the comic books’ bowtie-fiddling underdog, while Flockhart finds just the right calibration of snarky superiority. Having very specific story points to serve in the opening hour, Leigh, Jordan and Harewood — as Kara’s sister Alex, CatCo admirer Winn and E.T.-hunter Hank Henshaw — obviously will benefit from greater character development moving forward.

Yes, you will smile wide seeing Helen “Supergirl” Slater and Dean “Superman” Cain share an early scene, and yes, there is a drinking game to be played, for every time (and there are many) Superman is referred to not by name.

THE TVLINE BOTTOM LINE | Monday’s DC Comics face-off is super-fun Supergirl‘s to lose, unless moody Gotham manages to return in especially strong form. The bigger question may be how CBS will fare opening the night with a drama versus comedies (for the first time in light years), though Supergirl’s bright-colored family friendliness could bring in eyeballs that tended to dart away from those bawdy Broke Girls.

Watch a video preview for Supergirl, then vote in our poll below.
https://www.youtube.com/watch?v=Lm46-envrHo