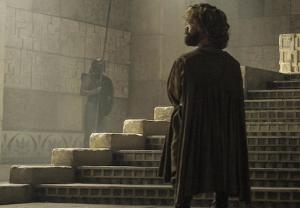 Dearest khaleesi, may we present you with your gift?

These just-released photos from Sunday’s episode of Game of Thrones (9/8c) offer a first look at one of this season’s long-teased scenes: the initial interaction between Peter Dinklage’s Tyrion Lannister and Emilia Clarke’s Daenerys Targaryen.

RELATED Quotes of the Week From Game of Thrones, The Flash, Late Show and More

The former has been brought before the latter via his run-in with her former advisor Jorah Mormont (who, you’ll notice, is not in the photo). And at the end of last week’s episode, the Mother of Dragons did not seem poised to thank Ser Jorah for the introduction to her “gift.” Think Tyrion can talk his way outta this one?

Also in the newly released pics, several shots of Jon and Tormund beyond The Wall, where they encounter a new wildling woman named Karsi (played by Pitch Perfect 2‘s Birgitte Hjort Sorenson).

Click through the gallery below to see the moment — plus more photos from “Hardhome” — then hit the comments with your predictions for how the Dany-Tyrion meeting will play out.