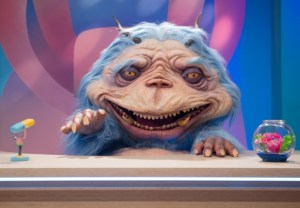 The Gorburger Show is going mainstream.

The YouTube sensation, created by and starring Silicon Valley‘s T.J. Miller, has received a pilot order at HBO, TVLine has learned.

To those unfamiliar with Gorburger, here’s the crazypants premise: A giant, blue, space monster (voiced by Miller), crashes into earth and immediately invades a Japanese morning show, despite only speaking English. He then uses the remaining, uneaten crew to host and interview the most interesting humans from pop-culture, music, art, technology, and more. (A sample episode has been embedded below for your viewing pleasure.)

Funny or Die is on board as a producer of the half-hour project.