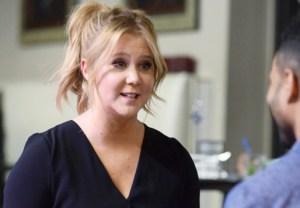 Amy Schumer crushed her appearance on Monday’s Bachelorette — in which she helped Kaitlyn Bristowe judge her suitors’ senses of humor, or lack thereof — and if you’re not-so-secretly hoping this could lead to Schumer’s own televised quest for love, you’re not alone.

Robert Mills, the SVP of Alternative Series, Specials and Late-Night Programming for ABC Entertainment, on Tuesday extended an “official” invitation to Schumer in the form of a tweet:

OK here is the official offer to @amyschumer to become #TheBachelorette. Just say yes and we start tomorrow. #DraftAmy

To say that we co-sign Mills’ invitation is an understatement. Not only would the Comedy Central star’s blunt, unfiltered style make for hilarious TV, but putting such an unapologetic figure at the center of the long-running series could make it the feminist vehicle it’s always pretended to be.

If there’s any doubt in your mind that Schumer is the Bachelorette of America’s dreams, just watch this clip of the super-fan’s appearance on Monday’s episode, in which she (figuratively) dresses down hopeful contestant J.J.:

Now imagine Schumer telling it like it is with every contestant. Isn’t it about time we had a Bachelorette who says what everyone’s thinking? Who isn’t afraid to puncture a few egos? Who stops being polite, and starts getting real? (Wait, wrong show, but you get the idea.)

UPDATE: Schumer has (sort of) responded to Mills’ invitation with a tweet of her own:

Tell us: Would you love to see Schumer as the next Bachelorette? Cast your vote below, then drop a comment with your reasoning.