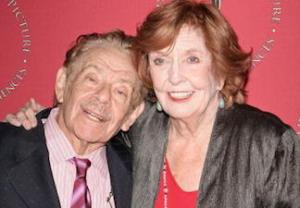 Anna Meara, an actress and comedian whose career spanned 61 years — as long as her marriage to husband and comedy partner Jerry Stiller — died on Saturday of undisclosed causes. She was 85.

As part of the Stiller & Meara comedy team, Meara appeared on such variety series as The Ed Sullivan Show. She and Stiller, among the first graduates of the Second City comedy troupe, also partnered in appearances on Rhoda, for the eponymous The Stiller and Meara Show, and on King of Queens (where Stiller was a regular).

Meara won a Writers Guild Award for co-writing the 1983 TV-movie The Other Woman.

Her film credits include Night at the Museum, where she shared scenes with son Ben Stiller.

“Anne’s memory lives on,” reads a statement issued by her family, “in the hearts of daughter Amy, son Ben, her grandchildren, her extended family and friends, and the millions she entertained as an actress, writer and comedienne.”