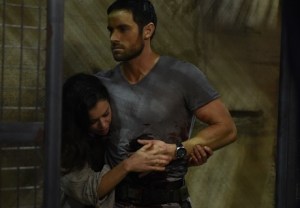 Warning: The following story contains major spoilers from this week’s episode of Orphan Black. Proceed at your own peril.

Orphan Black engineered another dramatic character transformation in Saturday’s episode, but this one will have few fans applauding: Hot Paul is now… Dead Paul.

After helping Sarah escape — and confessing his feelings to her — the wounded military man (played by Dylan Bruce) stayed behind on Project Castor grounds and was shot multiple times by Dr. Cody, who has been using the male clones’ sexually transmitted defect to sterilize women.

“Cure them, Virginia. Drop the rest,” a teary Paul begged, before revealing that he was holding a grenade. Cut to the base camp going boom just as Helena came to Sarah’s rescue.

Saying goodbye to Sarah’s ambiguous ex-lover was a sad affair, executive producer John Fawcett admits. But his heroic sacrifice serves as a crucial turning point for the BBC America drama.

“Anytime someone dies… it changes the course of the show,” Fawcett says, adding that Paul’s demise “is an important driving factor in where Sarah’s heading toward the end of this season and into the next.”

Below, Fawcett also talks about bringing Beth to “life,” the Rachel vs. Felix face-off, that baller Alison/Donnie scene and more. 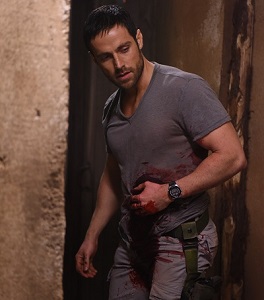 TVLINE | Is Paul definitely dead?
I don’t know, man… [Laughs] He blew himself up. I think that’s cool. I like the fact that Paul is a character that we have not really been able to trust. We never knew where we stood with him. Was he a good guy? Was he a bad guy? Why is he doing the things he’s doing? And we’ve come through the last bunch of episodes to realize why he’s making the decisions he’s making. And, at the end of the day, he makes the right choice and heroically throws himself on the bomb. Literally. It was the way we wanted to see that character depart.

TVLINE | This is the first series regular character to be killed off. What was it like deciding to say goodbye to Paul and Dylan?
[This] was our plan from the beginning [of] plotting out Season 3. We knew. Dylan knew. It was a bit sad on set, though, I have to say. It was a little sad to see him go. [There were] a lot of feels on set, if you know what I mean.

TVLINE | Should we be questioning whether Dr. Cody and Rudy were actually taken out by that grenade? ‘Cause we didn’t see any bodies…
[Laughs] Yeah, you should question everything, of course.

TVLINE | Now more than ever, Sarah has so much information about herself and her sisters. What does that mean for her going forward? I felt like Beth, in a way, was telling her to step back. But does knowing all this just make her want to look for answers even more?
Absolutely. It’s more important than ever that Sarah gets to the bottom of this — and not just for herself and for the safety of her immediate family. The driving force with Sarah is that she’s really had to step up and become the leader. She’s gone from being a teenage-runaway-reluctant mother, to having to be not just a responsible mother, but a leader. The one who is keeping the sisters together, and the driving force behind trying to find a cure for Cosima.

TVLINE | But is that vision of Beth a cautionary tale for Sarah? Beth got so caught up in all this, it led to her downfall.
I think that’s a very good way to look at it.

TVLINE | What was important for you to accomplish in that moment, in terms of portraying Beth and her message to Sarah?
It was interesting having conversations with Tat [Maslany] about that. We spoke about it at length. We both decided this was Sarah’s version of what she believed Beth would be. It’s not a ghost. She’s obviously having a kind of dream/hallucination, vision-y thing. Is this Beth? Is this actually what Beth was like? I don’t know. That’s open to interpretation. 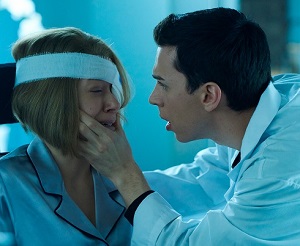 TVLINE | The Felix-Rachel scene was so emotionally powerful for Rachel and so uncharacteristically angry for Felix. Is this a new side of him that we’re going to continue to see?
It was an important scene for Felix, just to show how much he cares about Sarah and how freaked out and upset he is and what he’s willing to do to help and to get her back. It was good for him to show a little anger and [be] aggressive with her. When we were designing that scene, I wanted Felix to be so wound up in wanting to get the truth out of Rachel that he takes it too far… You actually feel for Rachel a lot in that scene. And Felix has to stop himself and go, “[Horrified gasp] I’ve gone too far.” I feel like Felix leaves that scene feeling a little awful. It maps a lot of emotional landscape between both characters in very short order. Both Tat and Jordan [Gavaris] did a wonderful job with that scene.

TVLINE | Does Rachel know she holds the key to deciphering Duncan’s work?
No, I don’t think she does at this point.

TVLINE | Has Helena really forgiven Sarah?
Yeah, I think so. Helena loves Sarah. Even though she’s felt a lot of betrayal, she did turn around and come back and that’s what’s important. She just can’t leave Sarah no matter how betrayed she might feel. 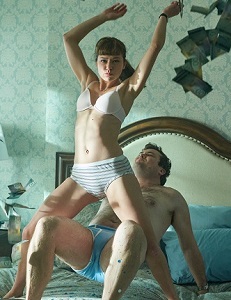 TVLINE | I know Alison is your favorite, so I have to ask you about the scene of her and Donnie dancing on the bed. I feel like that was all your doing.
[Laughs] I don’t know if it was all my doing, but I know that Aubrey Nealon, who wrote the episode, and I laughed a lot about having Tat and Kristian [Bruun] do a scene like that. Listen, I have seen Tat and Kristian… We’ve been out to a few parties together. And those two dance like crazy maniacs together. You can’t get them off the dance floor. They love all that hip-hop, twerking kind of stuff. So we just thought it would be hilarious.

TVLINE | There was another death in this episode. Have we seen the last of Pupok the Scorpion?
I can’t say that. Listen, Pupok’s not really real. Pupok’s a spirit animal. Can you really kill a spirit animal? I don’t know.

Orphan Black fans, what did you think of the episode? Did you find yourself surprisingly gutted by Paul’s death?