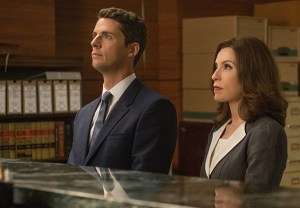 Turns out The Good Wife will be down two full-time cast members when it returns this fall: Matthew Goode will not be back as a series regular in Season 7, TVLine has learned exclusively.

Goode’s exit follows the departure of Archie Panjabi, who made her final appearance as Kalinda in the May 10 finale. However, while it’s unlikely Panjabi will resurface in the near future, I’m told there’s a chance Goode could make a guest appearance or two.

Goode joined The Good Wife as attorney Finn Polmar during the second half of Season 5, in the wake of Josh Charles’ swan song as Will. He returned this past season as a full-fledged regular.

The actor’s status change was hinted at in the aforementioned season-ender, which saw Finn reject Alicia’s (Julianna Margulies) offer to join her nascent law firm.

Don’t feel badly for Goode though. The British thesp will return (in a big way, apparently) to Downton Abbey as Henry Talbot for the PBS phenom’s forthcoming sixth and final season.

Thoughts? Sad to see Goode go? Disappointed that the Alicia-Finn romance never quite took off? Hit the comments!