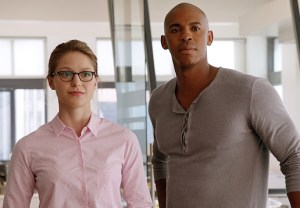 Faster than a speeding bullet, the pilot for CBS’ Supergirl has illegally leaked onto file-sharing sites.

CBS ordered the buzzy superhero drama to series barely two weeks ago, and only unveiled the first footage last Wednesday, May 13, during its annual Upfront presentation to advertisers.

The leaking of pilots for an upcoming TV season is nothing new, though Supergirl‘s super-fast pirating would seem to set a land-speed record for a high-profile project. Last summer, for example, the pilots for The Flash and Constantine — also comics book-based fare appealing to a certain crafty, passionate crowd — didn’t find their way online until late June.

The technology-related business solutions firm Excipio told our sister site Variety that the Supergirl leak is available in HD without any evident watermarks, and has been downloaded at least 120,000 times since hitting piracy sites.