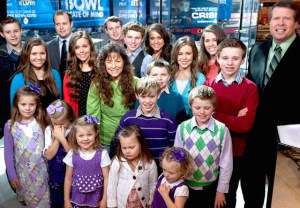 TLC has yanked reality hit 19 Kids and Counting from its schedule following eldest son Josh Duggar’s admission that, as a teenager, he sexually molested underage girls — allegedly including some of his sisters.

UPDATE: TLC has issued an official statement about the show’s status: “Effective immediately, TLC has pulled all episodes of 19 Kids and Counting currently from the air. We are deeply saddened and troubled by this heartbreaking situation, and our thoughts and prayers are with the family and victims at this difficult time.”

The show, which premiered in 2008 as 17 Kids and Counting and wrapped its ninth season on Tuesday, follows Jim Bob and Michelle Duggar and their enormous brood — all of whose names begin with the letter ‘J’ — as they’re raised in the Independent Baptist faith.

Controversy erupted this week when InTouch Weekly published a 2006 police report investigating allegations that Josh Duggar forcibly fondled several girls — and that his parents waited more than a year to report the abuse to authorities.

The now 27-year-old Josh released a statement and stepped down from his post at the Family Research Council, which, among other things, lobbies “to preserve man-woman marriage.”

“Twelve years ago, as a young teenager, I acted inexcusably, for which I am extremely sorry and deeply regret,” said Josh Duggar, in the statement. “I hurt others, including my family and close friends. We spoke with the authorities where I confessed my wrongdoing, and my parents arranged for me and those affected by my actions to receive counseling. I understood that if I continued down this wrong road that I would end up ruining my life.”

Jim Bob and Michelle released their own joint statement. “When Josh was a young teenager, he made some very bad mistakes and we were shocked… That dark and difficult time caused us to seek God like never before. Even though we would never choose to go through something so terrible, each one of our family members drew closer to God,” they wrote. “We hope somehow the story of our journey — the good times and the difficult times — cause you to see the kindness of God and learn that He can bring you through anything.”

TLC reps did not respond to TVLine’s request for comment on the future of 19 Kids and Counting.

A TVLine poll from Friday morning found that more than 80 percent of readers think TLC should pull the plug on the show.

Did TLC do the right thing in pulling the show from its lineup? Or do they need to go a step further and officially cancel it? Sound off in the comments!