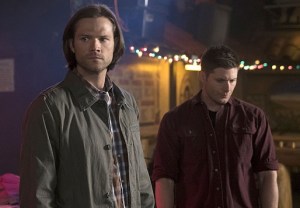 Wednesday’s season finale of Supernatural posed a question we weren’t prepared for: Are the Winchesters so evil that the world is better off without them? (According to the fans who still watch, 10 seasons in, that answer is a resounding “no.”)

As the hour begins, Sam is still determined to rescue Dean, but Cas is worried about the consequences of Rowena using the Book of the Damned to remove the Mark. As far as Sam is concerned, no one can tell him exactly what bad things could happen, so he declares, “We save Dean,” and that pretty much ends the debate. There’s still the problem of getting the ingredients needed for the spell: forbidden fruit, the Golden Calf and something that Rowena loves to make the ultimate sacrifice. “The problem is, I don’t love anything,” the witch says, but her memories tell a different story.

Cas summons Crowley (“You’re not in my contacts list”) and asks for his help, to which the King of Hell replies, “Blast me or beg!” Once the two make good, Crowley tracks down the one thing his mother cared for: a Polish peasant boy whose family took her in. In exchange, she cured the young child of his ailment and gave him immortality.

Meanwhile, Dean gets sloppy drunk and makes harsh judgments about a murdered girl while on a job. Even worse, he lets another hunter get killed. He trashes his hotel room, leaves behind a note for Sam (“She’s all yours”) and his car keys and makes his own summons. Greeting Death with a buffet of “the bad fat” foods, Dean says, “Consider it an offering: I want you to kill me.” 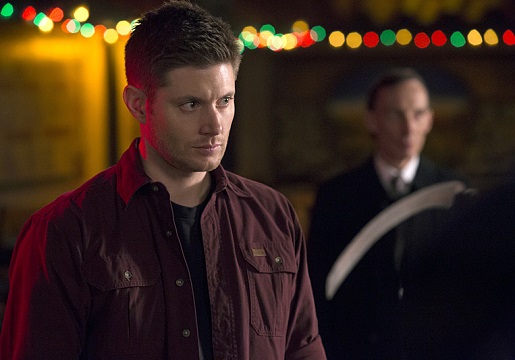 Unfortunately, nothing can kill him because of the Mark, Death explains. And removing the Mark? Not an option either, because it is the lock and key that keeps The Darkness at bay. The only way out is to pass on the Mark to someone else, which Dean isn’t willing to do. But wait, there’s a backup plan! And it involves… space? Death offers to send Dean somewhere not even on this Earth where he will still be alive but not a danger to others.

“Brother, I’m done,” Dean tells Sam, who has no idea yet that Dean traded his ‘lil bro’s life so he wouldn’t hurt anyone else. (Guess he forgot to mention that on the phone.) On top of that, Dean is now convinced he should have let Sammy die during the trials. “You knew that this world would be better without us here… Evil tracks us.”

Sam, however, is not willing to give up. “We are not evil,” he replies. “We’re far from perfect. But we are good.” Then Dean points out all the questionable things Sam has done lately — leading that man to sell his soul, getting Charlie killed — as evidence of his evil doings. The two break into a fight until Sam finally relents, saying, “You have to be stopped at any cost.”

Death requests that Dean do the honor of offing his own brother. “Sammy, close your eyes,” Dean instructs as he wields Death’s blade. As if the tears weren’t flowing enough already, Sam pulls out some childhood photos with Mary in the hopes that they will one day be Dean’s guide back to goodness and love.

In the end, that Winchester bond wins out — the only genre show that possibly has more unabashed heart and emotion is The Flash — as Dean instead kills Death, who disintegrates. (Does this make Dean the new Death?) Meanwhile, unbeknownst to the Dean and Sam, Rowena works her witchy magic and successfully removes the Mark, unleashing The Darkness, which consumes the town and the brothers as they sit helplessly in the Impala.

But those are not the only lives in jeopardy at the end of the finale. After completing the spell, Rowena orders Cas to attack Crowley and walks off with her freedom and the codex.

Supernatural fans, what did you think of the season-ender? Are you excited to see what The Darkness brings? Do you think Cas took out Crowley? Grade the episode via the poll below, then hit the comments to back up your pick!