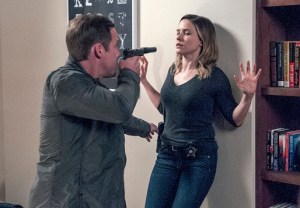 Wednesday’s season finale of Chicago P.D. was quite a downer for one member of Intelligence. But for three others, there was much to celebrate.

After taking down some dirty cops, Lindsay is forced to undergo a drug test since she shot one of the officers. She never goes through with it though because she knows it will come back positive. She tries to play it off with Voight as a night of drunken fun — maybe somebody slipped her something, she suggests. He initially tries to cover for her, proposing that he could backdate a prescription for depression. Regardless, she’s still off the case.

Lindsay continues to sink further into her hole, even as Halstead offers his support. “Know that I am looking out for you,” he tells her. “Whatever you’ve got going on upstairs, you’ve got to face it head-on.”

When Voight tracks her down at Bunny’s place of work, Lindsay appears defeated. “I was born into bad news and I can’t seem to get away from it,” she sighs. “The people that I care about the most end up getting hurt.”

Bunny tells him her daughter needs some space, but Voight orders Lindsay to get up and go to work. Instead, she turns in her badge and declares, “I quit.”

* It’s happier times for Ruzek and Burgess, who get engaged in surprisingly low-key fashion after he leaves the ring box in her locker. “I want to spend the rest of my life with you,” he declares. “You and I are frickin’ awesome together. I know this is quick, but I don’t care. I love you.” She, of course, accepts, but I have to admit, I was expecting a more romantic question-popping. The word “frickin'” never belongs in a proposal.

* After saving Lindsay’s life, Atwater gets bumped back up to Intelligence.

* Olinsky finds out he has a (juvenile delinquent?) teenage daughter (played by Supernatural/Mad Men guest star Madison McLaughlin) from a woman he was with during an undercover gig.

* Antonio gets his colleagues to invest with him in a boxing gym that once saved his life.

* End times may be upon us because the finale played like The Redemption of Hank Voight. Not only is he depicted as the positive yin to soul-sucking Bunny’s yang, but he also puts away the dirty cops who are the spitting image of his past self. Considering the concerns I had early on with centering a whole show around such a shady character, it was high time this issue was tackled.

Chicago P.D. fans, what did you think of the season ender? Did Lindsay’s downfall bum you out? Was Ruzek’s proposal sweet or a bit of a letdown? Grade the episode via the poll below, then hit the comments with your thoughts!