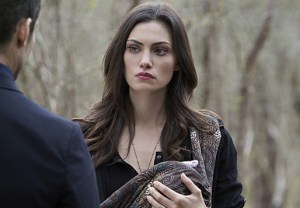 When we last saw The Originals‘ Hayley Marshall-Kenner, she was bracing for an uncertain future after her entire pack was cursed to remain in wolf form outside of a full moon. Needless to say, Season 3 is going to be rough for her.

TVLine caught up with Phoebe Tonkin last week at The CW’s upfront presentation, where we got her thoughts on Hayley’s journey, including her hopes for her character’s many ‘ships.

TVLINE | How much of Hayley are we going to see in Season 3? Less, I imagine?
Right now, we’re only going to see Hayley once a month. I hope that at least one episode will be the full day when I’m human. I’d also like to see Hayley in wolf form. I don’t know if we’ve seen that yet, and it could be really cool.

TVLINE | And now Klaus is, sort of, a single dad. How do you feel about that, and what are your thoughts on his future with Hayley?
[Laughs] I think Klaus had better sire some nannies. Hayley’s not going to be able to forgive him easily for what he’s done. Even if he did it for the good of his baby, I don’t think he did it in the right way. He should have let Hayley know that’s what he was doing so she could have been part of the plan. But he didn’t do that, so now, [she’s] pissed.

TVLINE | Riley Voelkel is coming on full-time. Are you looking forward to potentially building a Hayley-Freya friendship?
My favorite storylines on our show are the ones with the girls working together for the greater good, and not talking about men. Now that we have four girls — me, Riley, Leah [Pipes] and Danielle [Campbell] — I’m excited for storylines with us four.

TVLINE | Well, speaking of the men she doesn’t want to talk about, I’m a fan of the ever-present Hayley-Jackson-Elijah triangle. How do you hope that resolves itself?
I love it, too! It’s like There’s Something About Hayley, which is really fun. I don’t know, they’re both great characters and they’re both amazing actors, so I’m just lucky that I get to work with both of them.

We also spoke with executive producer Michael Narducci after the finale, who gave a little more insight about what we can expect from Hayley in Season 3:

Built into the DNA of the show is the Mikaelson family. There’s also this young baby, and that baby has a mother, and she has a clear tie to Klaus and a clear tie to Elijah; she’s fundamentally important to the show. Even though she’s in a worst-case scenario, we definitely have not seen the last of her. We have to resolve what has been done to her and what it means to her, and if there is any cure to her situation, we’ll have to deal with that as priority one. Whether that improves her condition, or significantly worsens it, I can’t say. She’s not being written off the show.

Originals fans, your hopes for Hayley’s future? Drop ’em in the comments below.