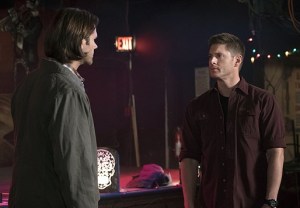 What would a Supernatural season finale be without some Winchester angst, one bro trying save another, a potentially dubious deal and a cliffhanger ending?

Wednesday’s Season 10 closer (The CW, 9/8c) promises to deliver on all that, adding up to a finish that will change the landscape of the show “a lot,” executive producer Jeremy Carver promises.

Here, the EP gives TVLine a taste of what’s ahead in the Save Dean Campaign — if that’s even possible — and weighs in on Charlie’s shocking demise.

DEAN, ARE YOU THERE? | Given how dark and angry Dean has gotten over the last couple episodes, it’s almost hard to recognize him as the fun-loving guy who’s never met a slice of pie he didn’t like. So as we head into Wednesday’s hour, what is Dean’s state of mind? Is there even any of the old hunter left in there to salvage? “That’s one of the central questions of the finale,” Carver teases. “I wouldn’t want to ruin anything by saying any more than that.” 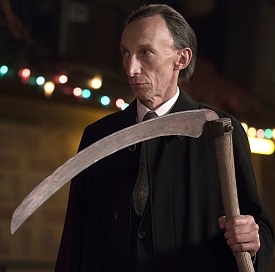 AT DEATH’S WILL | The key to Dean’s survival may lie in the return of Death, who can remove the Mark of Cain — on “a fairly sizable, non-negotiable condition,” he offers in the promo. The Horseman’s presence is “not a good thing. Ever,” Carver warns, so consider us concerned about that caveat.

S.O.S… FOR SAM? | Per Winchester tradition, Sam has spent much of the season determined to rescue his older brother, even teaming up with witch Rowena to do so. That partnership, however, has thus far proved unfruitful. So just how far down this dark rabbit hole will Sam go in his quest to rid Dean of the Mark? “I don’t think we’ve ever seen him go further,” Carver attests. Then there’s the issue of whether Sam and Castiel — who was on the receiving end of a brutal beating from Dean in last week’s episode — are even on the same page with regards to helping their brother/friend. “Yes and no,” the EP replies. “There’s the question of cost.”

BRO TO BRO | In case you couldn’t tell by the above teases, it’s high anxiety and foreboding times for the Winchesters, which doesn’t leave much room for “lighter or even more tender brotherly moments,” Carver explains. “Given where the boys are and where they’re going in the finale… it’s a long, dark way from here to there.” 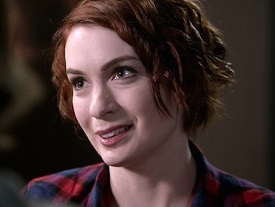 RIP, CHARLIE | Still crushed by the hacker’s bloody finish? You’re not the only one. Although her death paved the way for the season-ending arc, “My goodness, it was wrenching for all of us!” Carver says of bidding farewell to the Winchesters’ pseudo-sister. “It always is when you’re letting go of a beloved character, whether it be Charlie or Bobby or Kevin, and even worse when you’re saying goodbye to as wonderful a human as Felicia Day.”

Are you possibly prepared for Supernatural‘s season finale?