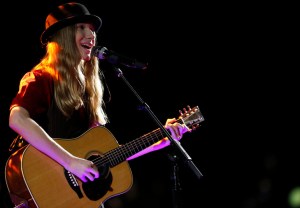 The greatest superhero movie of summer went down on Monday night — in the reality-competition genre, of all places! — and there wasn’t a single exploding car, collapsing building or vortex into another dimension in sight.

Some people might refer to it as The Voice‘s Season 8 Performance Finale, but to my ears, we might as well dub it Sawyer Vs. Koryn: Wonder-Teen Vocals Activate! (which, come to think of it, would be the kind of Saturday morning fare I’d encourage my children to watch).

Every comic-book-ish tale needs a villain, however, and if I’m being 100 percent honest about how the competition is playing out in my mind, then let us all boo and hiss as the notorious, nefarious Screamzilla enters the scene, crushing cherished soul classics and cheesy ’80s radio jams under the weight of her relentless vocals, spurred on by the deliciously evil Blake Shelton.

Yes, yes, I know Meghan Linsey is probably a very lovely person — and there are things I really appreciate about her muscular-but-weathered instrument. (Every good baddie has some positive attributes, no?) It’s just that as far as I’m concerned, Meghan uses her powers in the service of all that is wrong — crushing vulnerability, dynamics, and cities full of fleeing innocents in her quest for vocal dominance.

I have to tip my hat to Blake, though, a guy whose “aw, shucks, I’m just plainspeakin’ off the top of my head” banter masks a razor-sharp strategic vision. When he told Meghan that at this point in the competition, it’s hard to gather who’s the front-runner (a bald-faced lie!), he was essentially confirming that the front-runner is Sawyer. And then, his tone shifted as he told his sole remaining artist she had perhaps “changed the course of events” by giving “the performance of the night” on Percy Sledge’s “When a Man Loves a Woman.” Dude might just as well have pressed the “detonate death-laser” button on Meghan’s control panel and sent her in the direction of the wide-eyed teenager from upstate New York.

What I haven’t mentioned, though, is that Sawyer’s quiet ability to live inside a song, to make you feel like you’re hearing a well-known lyric for the very first time, could/should serve as his forcefield. Koryn, alas, might be just a touch too raw at this point in her artistic development to survive the Full Blake, but if she winds up in third place, that’d still be a noble end for the southern teen who just a few months ago was performing in nursing homes and working in a local pizza shop.

But enough about my predictions and predilections — let’s get to letter grades for this week’s performances:

Koryn Hawthorne (Team Pharrell) — James Brown’s “It’s a Man’s Man’s Man’s World” — Grade: A | James Brown’s anthemic ballad may be more overdone on reality singing shows than your local news channel’s “Warning: This benign household item could kill you!” segments. (In fact, you can find respective “…Man’s World” covers on my list of Best Idol Performances and Best Voice Performances Ever.) Koryn made me forget all that, though, with two minutes of raw, emotional power and pitch perfection. When she dipped lowww on “Noah made the arc,” when she put extra stank on “Man makes the money,” even when she whispered “he’s lossst… in the wilderness,” her tone was like a shock-paddle to my “It’s Monday, and I’m already on empty” heart.

Meghan Linsey (Team Blake) — self-penned “Change My Mind” — Grade: B+ | Xtina’s line of interrogation — asking when and with whom Meghan wrote her ditty — may have been a subtle effort to underscore the fact that the blond Nashville gal is a seasoned vet with a Rolodex of industry connections, but it doesn’t negate the urgency or cleverness of “Change My Mind.” As Blake noted with a great deal of glee, Megahan’s ode to female empowerment has a killer hook — though I wished he’d warned her how her vocal tone devolves into something like a screechy cackle when she’s pushing it past its boundaries. Then again, maybe it was the 20 tons of dry ice floating over the piano that caused the tightness of tone.

Sawyer Fredericks & Pharrell Williams — Seals & Croft’s “Summer Breeze” — Grade: B- | Urgh… why was there a lady sitting on a beanbag (!) playing the tambourine (!!) in the background of Sawyer’s opening number? More importantly, why did Pharrell waste our time with a tune that neither brought out the specialness of Sawyer’s tone, nor did anything to advance the idea of who he is as an artist? Sawyer’s lead over his competitors is so vast, Pharrell could’ve afforded to take a massive risk — maybe let him Sawyer-ize one of the uptempo R&B jams that the megaproducer has brought to radio over the last decade. But maybe my crazy ideas are as wrong-minded as asking American Pharoah’s jockey to throw in a bit of dressage when he’s three strides from winning the Triple Crown? (Don’t all nod your heads at once.)

Joshua Davis (Team Adam) — self-penned “The Workingman’s Hymn” — Grade: B | Raise your hand if you heard the title of Joshua’s original anthem and expected some dreary, minor-chord dirge? Surprise! Instead, the guy cooked up a fairly catchy (albeit cliché-riddled) anthem that sounded like a rejected 1986 collaboration between Bruce Springsteen and John Cougar Mellencamp. (Most songwriters should be so lucky, really.) “The sun keeps shinin’ through the drivin’ rain, I know we can turn it around,” Joshua offered cheerfully. Oh, dude, not when you’re up against Sawyer Freakin’ Fredericks!

Sawyer Fredericks (Team Pharrell) — original single “Please” (written by Ray LaMontagne) — Grade: A- | As much as I’m dying to hear what a Sawyer Fredericks original sounds like, my brain exploded like a Mentos dropped in a bottle of Diet Coke after learning Ray LaMontagne had bequeathed one of his originals onto the young kid who idolizes him. Not surprisingly, the melody sat directly in Sawyer’s gruff sweet spot — and gave him a chance to convey a romantic yearning well beyond his tender years. “Dude, you win… Game over,” chirped Adam Levine, and while the competing coach was merely discussing the LaMontagne news, not the competition in general, his words couldn’t have been more apt.

Koryn Hawthorne & Pharrell Williams — The Beatles’ “We Can Work It Out” — Grade: C+ | No. 2 in a string of four straight head-scratcing duet choices put a funky bass line underneath the Fab Four’s optimistic hit, but left Koryn riffing and hollerating nonsensically over the chorus, as Pharrell almost inaudibly vamped behind her. Why the heck didn’t the philosophical coach let Koryn cover Beyoncé’s “Work It Out” (an underrated Austin Powers soundtrack cut that he co-wrote) rather than “We Can Work It Out” (a 50-year-old tune that in no way presents her as a radio-ready pop-R&B sensation)?

Joshua Davis (Team Adam) — Leonard Cohen’s “Hallelujah” — Grade: C | I know I’ve been tough on Joshua this season, and I know Adam’s as much to blame for saddling him with one of the Top 5 Most Played-Out Songs an Artist Could Choose on The Voice, American Idol or The X Factor (not an official title, though it should be). But Joshua and Joshua only must answer for melodic choices that shrank the epic sweep of Cohen’s ubiquitous melody, rendering it both sleepy and inconsequential. Heck, the guy even skipped the critical/final falsetto refrain, causing a malfunction in the the Xtina-Bot 2015: “Josh, I’m really excited to have had the opportunity to watch you grow through this competition. I really have seen a lot of versatility. And sometimes, whenever I see someone that has such a beautiful voice in the style of music that you do, sometimes it’s hard to get, you know, different styles from them. And that was so heartwarming and you were just so right on and there with the melody. And I just was so engaged. So thank you for that.” What I really think she meant to say was a Jebidiah Atkinson-style, “NEXT!”

Meghan Linsey & Blake — Aretha Franklin’s “Freeway of Love” — Grade: D+ | This wouldn’t be the first time Blake chose a “fun” duet for himself and one of his finalists, but this time around, both his and Meghan’s facial expressions made it seem as though they knew they were delivering an under-rehearsed, overbaked mess. The final third of the performance — pretty much everything that came after the key change — made it sound like Meghan’s vocal cords were being pushed through a meat grinder. Let us never speak of this catastrophe again, OK?

Joshua Davis & Adam Levine — Paul Simon’s “Diamonds on the Soles of Her Shoes” — Grade: C+ | Just in case there was an impala’s chance in a lion’s cage of Joshua winning, Mark Burnett & Co. finished him off by putting this faded carbon copy of Paul Simon’s bright, shiny original as his last impression. As his vocals faded inoffensively into the mix, I half expected Carson Daly to present him with a $100 gift card to Outback Steak House and thank him for participating.

Koryn Hawthorne (Team Pharrell) — original track “Bright Fire” — Grade: B+ | Mad props to The Voice‘s producers for making sure all four of their finalists got themselves a finale-night single representing their musical points of view. And while the island beat and inspirational lyrics of “Bright Fire” might not rank alongside Pharrell’s masterworks (“Happy,” “She Wants to Move,” “Caught Out There,” etc), he at least penned for Koryn something that let her work the Voice stage and to prove her distinctive vibrato sounds as good wrapped around a groove as it does on a booming ballad. I know I’m bound to be disappointed six months from now — and I won’t be surprised to be disappointed – but isn’t it easy to imagine that with the right material, Koryn and her immediately recognizable voice could easily make some noise on the charts?

Sawyer Fredericks (Team Pharrell) — Neil Young’s “Old Man” — Grade: A | “There’s this rich sense of Americana in Sawyer’s voice,” said Pharrell, perfectly encapsulating why a 1972 folk-pop jam was the right choice for a 16-year-old high-school student. I’m not exactly sure how Sawyer’s voice can simultaneously transport me back to cheery days of listening to A.M. radio with the windows rolled down — and yet also manage to sound completely fresh and current, but a good magician never explains his tricks, I suppose. Will Sawyer be the first Voice winner whose weekly iTunes dominance will turn him into a household name? I wouldn’t bet against it.

Your turn. What did you think of The Voice performance finale? Who will win? Who should win? Take our poll below, then sound off in the comments! 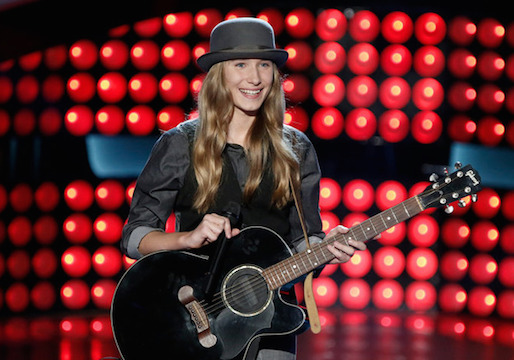