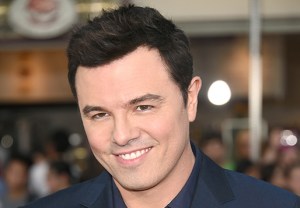 Lucky there’s a man who, positively can do, all the things that make us laugh and cry…

As it turns out, the Family Guy theme best applies to its creator, Seth MacFarlane, who will receive the Louis XIII Genius Award at this year’s Critics’ Choice Television Awards.

The Genius Award honors those who demonstrate unprecedented excellence in the television arts. Past recipients include Ron Howard, Ryan Murphy and Judd Apatow.

Additionally, nominees were announced for the inaugural “Most Bingeworthy” Award, among them American Horror Story: Freak Show, Empire, Game of Thrones, Orange Is the New Black, Vikings and The Walking Dead. Fans can vote for their favorite shows here from now through the first hour of the awards ceremony, airing Sunday, May 31, at 8 pm on A&E.

* American Idol exec producer Per Blankens, who worked on the show for two years, is exiting the reality series ahead of its final season, TheWrap reports.

* The Goldbergs has promoted AJ Michalka — aka Barry’s girlfriend Lainey Lewis — to series regular for Season 3, per The Hollywood Reporter.

* Former NBA star Charles Barkley — a real-life fan of Suits — will guest-star on Season 5 of the USA drama, appearing in Episode 3 as a heightened version of himself, per THR.