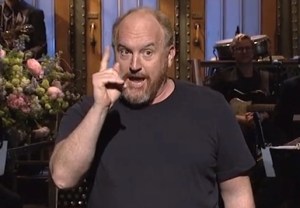 Expectations were higher than an ’80s soap actress’ hair as Louis C.K. returned to host the Season 40 finale of Saturday Night Live.

After all, his March 2014 installment scored a grade of A or B from almost 65% of TVLine readers — pretty solid feedback from a notoriously tough crowd.

The good news is that C.K. took some big risks right from the get-go — thank goodness, there was some genuine comic payoff in his extended flights of fancy about “mild racism” and child molesters (the latter of which has drawn some criticism) — and even the sketches that didn’t quite gel at least had interesting concepts.

Below are my picks for the episode’s best and worst:

BEST: SPRINT STORE
C.K. went all out as a cellphone salesman overheard on his first day at work doing an impersonation of his rageful black female boss (Leslie Jones), then spending the next five years pretending he speaks in a similar tone and cadence to her in order to avoid being fired). Cue-card flubs aside, C.K.’s compliment that Jones’ nails were “on fleek,” plus her final-act treachery to expose the big lie, had me howling with laughter — right down to Jones calling C.K. a “Jabba the Hutt-lookin’ white bitch!”

BEST: OPENING MONOLOGUE
Not every joke in C.K.’s monologue landed, but even the clunkiest at least had some interesting edge. Of course, the opening one-two punch of racism and Middle East unrest seemed tame compared to the comic’s riff on the comedic minefield of pedophilia. Noting how Mounds candy bars are his great pleasure — but that he would quit them immediately if it meant going to jail and being hated by everyone — C.K. spouted that child molestation “must be really good, from their perspective.” Yikes. And also LOL.

HONORABLE MENTION: LUMBERJACK ADS
The show gave us two random interludes — one with a trendy restaurant-goer passing on a toothpick, and one with a book-store patron deciding to opt for a downloaded version — that C.K. as an anxious lumberjack, with a single tear streaming down his cheek. Beck Bennett, meanwhile, delivered a corresponding jingle: “If you don’t use wooden things, what will happen to the lumberjacks?”

HONORABLE MENTION: RIHANNA’S “BITCH BETTER HAVE MY MONEY”
I’m still not sure how I feel about Rihanna’s use of bad CGI, a jank hoopty and a bound-and-gagged hostage to build an audience for her latest single, but I’m not gonna lie and say I wasn’t entertained. (“American Oxygen,” meanwhile, was pretty damn good, too.)

Your turn. What did you think of Louis C.K.’s SNL host gig? Take our poll below, then sound off in the comments! (We’ll post video when it’s available on Sunday a.m.)