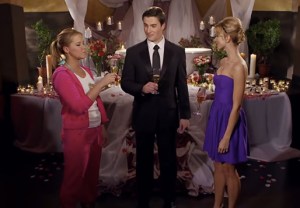 Amy Schumer may not have won Love Tub, but she did get good practice for her next gig: a cameo on The Bachelorette.

The comedienne announced on Jimmy Kimmel Live! that she will appear on the reality franchise’s upcoming season, premiering May 18 at 9/8c.

In The Bachelorette‘s 11th cycle, 25 men will choose whether they’d like to woo Kaitlyn Bristowe or Britt Nilsson — and Schumer already knows which woman comes out victorious.

“I have coveted information,” she told Kimmel, before joking, “I told most of the people I know.”

Watch Schumer discuss her Bachelorette stint with Kimmel below:

* Seth Rogen, an executive producer of AMC’s Preacher, shared a behind-the-scenes photo from the upcoming drama pilot. Scroll down to see the snapshot, which features Dominic Cooper (Agent Carter, left) as the titular minister and Ian Colletti (Rake) as conflicted teen Arseface.

* Season 3 of the Sundance drama Rectify will premiere Thursday, July 9, at 10/9c.

* Aubrey Peeples (aka Nashville‘s Layla) has joined the cast of ABC Family’s Recovery Road, its upcoming drama about a teen party girl who must go to rehab or face expulsion from school. Per ET Online, Peeples will play the troubled ex-girlfriend of Sebastian de Souza’s Wes, who is seen in flashbacks as an innocent high schooler bearing no resemblance to the girl she is today.

* Disney Channel has given a pilot order to Paige & Frankie, a sitcom from Kyle Stegina (The Simpsons) and Josh Lehrman (Brickleberry), Variety reports. The potential series follows two 12-year-old girls who write and perform comedic songs about their everyday lives, with the dream of becoming famous musicians. Newcomers Olivia Rodrigo and Madison Hu will star as Paige and Frankie, respectively.