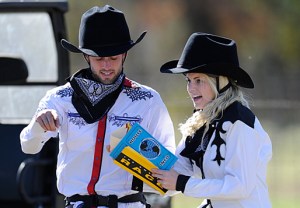 It seems everything is bigger in Texas, including Friday’s season finale of The Amazing Race, which featured four couples racing to the finish line instead of the usual three. (Something that’s becoming a trend, if these last two seasons are any indication.)

The last leg of Season 26 wrapped things up in Dallas, and before I go any further with this recap, I’m going to cut right to the chase and tell you who won. Ready?

The first team to arrive at the finish line with Phil was… Laura and Tyler! Take that, Blind Date skeptics!

In fact, Lady Luck ditched Mike and Rochelle — the only pre-existing couple left in the race — pretty much immediately after they scored a second chance into the finale. After completing the first challenge at Dallas’ AT&T Stadium, which required one teammate to catch a touchdown pass and kick an extra point, Mike and Rochelle returned to find their cab driver had abandoned them. They hopped into a new taxi shortly thereafter…. only to have their next driver run out of gas mere miles from the next activity. By the time Mike and Rochelle made their way to P2 Ranch, where the other teams had been corraling longhorns into a pen, they were met with nothing more than Phil’s surprise elimination. Better luck next time, Team #TruckStopLove.

As for Blair and Hayley, who somehow steamrolled past all the other teams in recent weeks, there’s something oddly poetic about their ultimate downfall. During the next roadblock, in which teammates had to spot a clue from atop Reunion Tower, Hayley spied what she thought was a yellow-and-red clue box on the top level of a parking deck, only to later realize that she had completely missed the actual clue: a series of Amazing Race flags blowing in the breeze. In true Hayley fashion, the girl blamed Blair for her inability to spot the flags (“Help direct me, Blair! Blair, make a decision for me, please!”), and even though her second trip to Reunion Tower was successful, her mistake would ultimately put her and her teammate in third place. (I swear I’m trying not to be too gleeful about this, but Hayley makes that hard.)

All told, The Amazing Race‘s blind date twist was a success — competitively speaking, at least. Romantically speaking? The only randomly matched pair that actually did go on to date was Jeff and Jackie: a duo that I really can’t wait to catch up with next season.

OK, your turn. Were you happy with the winner of The Amazing Race? Cast your vote in the poll below, then hit the comments with your thoughts on the finale.