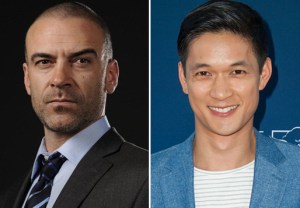 To quote the late*, great Rafiki: “The king has returned.”

Brilliant, cunning, and dangerously handsome, Valentine is a mysterious Shadowhunter wielding immense power. His stoic, charming, and confident presence allows him control over his many followers. To seek out what he wants, Valentine executes anyone in his way, never thinking twice about it.

With eccentric style, he’s fierce, cunning and keeps his cards close to his chest. Though he looks like he’s in his 20s, he’s hundreds of years old – which makes him wiser and wary of others.

–
In case you’re not up to speed, Shadowhunters — the series adaptation of Cassandra Clare’s Mortal Instruments book series — follows a young woman named Clary Fray who discovers on her 18th birthday that she’s a Shadowhunter, a human-angel hybrid destined to hunt and kill demons.

Your thoughts on their casting? Drop ’em in the comments below.

* I’m merely speculating that Rafiki is dead, but he was already super old in The Lion King, which came out more than 20 years ago. If I have time, I’ll look into it.