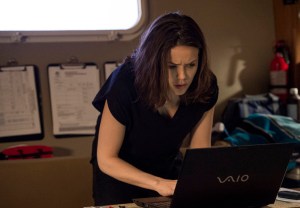 If The Blacklist creator Jon Bokenkamp ever decides his series needs rebranding, I’d like to suggest the alternate title Elizabeth Keen and the Terrible, Horrible, No-Good, Very Bad Life. (The hashtag might need some work, but I’m willing to rally around the #EKATTHNGVBL cause if you guys are.)

As if it weren’t enough that Liz has spent the last two years living a Truman Show existence — Your marriage is a lie! Your childhood memories have been blocked! Everyone else knows more about your life than you do! — our protagonist started the Season 2 finale with the new knowledge that she’s been framed by The Cabal and must go on the run. And the only person who could clear her name? The same one she either tolerates or despises on a daily basis.

But how did the hour end for Liz, and all the others entangled in her accidental web? First, Agent Keen was taken in for questioning by Tom Connolly and his creepy henchmen, but Red — who had someone on the inside, naturally — worked with Cooper to get Liz out. While she was on the run, here are the seven biggest moments that went down:

Liz discovers how she was infected
Try as she might, Liz can’t quite get the rest of the FBI to believe she’s being framed — especially not after her blood tests positive for the virus that killed Senator Hawkins. Cooper helps Liz get her hands on the surveillance tapes at Union Station, where she recognizes virologist Leo Andropov mugging for the camera. Not only did Andropov create the deadly virus, but he infected Liz with it when he knocked her down at the train station.

Red tells Liz he is a sin-eater
Nope, you’re not watching an episode of Sleepy Hollow, promise. While Red is chatting with Liz about how she can get out of her current legal pickle, Red tells her that he absorbs others’ sins, blackening his own soul in the process. There’s not enough time for Red to actually elaborate on what this all means, but it’s revisited later in the episode. (Scroll down now, if you must!) 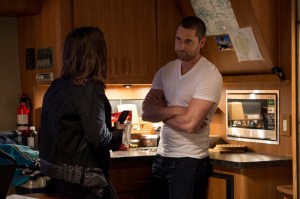 Andropov is killed
After Tom tries to get in touch with Liz, to no avail, Liz takes it upon herself to visit her ex — on his boat, no less. (The Blacklist sure does love its symmetry, eh?) She tells Tom about Andropov, not only that he infected her with the virus, but that he may have the answers about Liz’s mother that she so desperately craves. Before long, Liz and Tom have spotted Andropov and chased him down to an alley — an “extraction point” where he’s meeting a few important-looking men in suits. But when the men realize that Andropov has been followed, they waste no time in drawing their guns and putting a few bullets in Andropov’s chest. After they drive off, Liz holds Andropov as he dies, crying over all the information from her past that will die with the doctor.

Tom and Liz have sex
True, watching a virologist die in your arms might not be the most romantic ambiance in the world. But when Liz returns to Tom’s boat later, and he patches up her wounds, Liz admits that she doesn’t want to regret anything — and her biggest regret would be saying no to a future with Tom (who I really should be calling “Jacob” at this point, but it just sounds wrong). Tom, who wanted Liz to run off with him in the first place, has now decided she shouldn’t become a fugitive… but there’s nothing wrong with some sssssteamy bedroom action, which totally happens.

Cooper’s doctor works for The Cabal… but Cooper never had cancer to begin with
After spending some quality time between the sheets with Tom, Liz takes a look at the flash drive she found in Andropov’s safe house, and the information on it is dizzying. Stay with me on this one: Tom Connolly & Co., the skeezy schemers that they are, got in cahoots with Cooper’s oncologist, who showed Cooper brain scans that weren’t even his. (Meaning, Cooper never had a brain tumor of any kind.) What’s even more messed up? Andropov designed Cooper’s medication to mimic the symptoms of a glioblastoma, then altered them to make Cooper feel either better or worse during various points of treatment. There was no clinical trial, and nothing to be treated in the first place. That. Is. Cold.

Liz kills Connolly
Cooper and Liz track down Tom Connolly, where he’s preparing to host a swanky fundraiser. Liz tries to get the upper hand over the attorney general — demanding that he drop the charges against Cooper’s wife and prosecute Karakurt, among other requests — but Connolly reminds Liz just how deep his influence runs in the bureau… before she shoots him dead.

Liz remembers The Fire
Having murdered Connolly and officially begun life as a fugitive, Liz meets with Red, who plans to whisk her away to a safe place. She tells Red that pulling the trigger on Connolly also triggered those elusive memories of the fire that claimed her childhood. And herein lies Liz’s biggest confession yet: After all these years, she finally remembers that she killed her own father on that fateful night. When her parents were fighting, and her father got violent, Young Liz grabbed a gun and shot him. What’s more, Liz realizes that Red didn’t block that memory to protect himself — he did it to protect Liz. “You’re my sin-eater,” she realizes, to which Red replies, “Tried to be.”

And, although Red confesses that he didn’t want Liz to become like him, it’s too late. At the end of the episode, Liz’s photo goes up next to Red’s on the list of FBI’s Most Wanted Fugitives, while the two criminals sit in the back of an unmarked van, en route to… a place I imagine we’ll learn of in the opening moments of Season 3.

Oh, and we also learned that Agent Keen’s real name is Masha Rostova. “Liz” is probably simpler, if we’re being honest.

OK, your turn. What did you think of The Blacklist‘s Season 2 finale? Grade the episode in our poll below, then hit the comments to back up your choice!