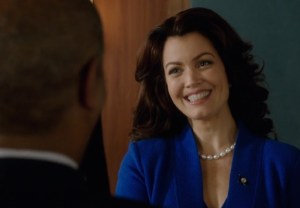 It was one week ago that Shonda Rhimes locked Scandal‘s Season 4 finale. For a second time. And it would not be the last.

As such, the drama’s cast is at a loss to so much as tease what to expect, wholly unaware of what made the final cut, what didn’t , and what might have been masterfully edited into something markedly different from what was filmed.

Speaking with TVLine earlier this week, Bellamy Young shared, “We got an email from Shonda that said she unlocked the locked finale and changed everything, so I genuinely have no idea [what to expect]. I shadowed [director] Tom Verica for that episode and we shot about an episode-and-a-half worth of material, so now… all bets are off!”

Katie Lowes echoed Young’s confusion, saying, “I went to ADR today [to loop dialogue for the finale] and everything is spinning on its head, so I’m not sure, of anything.

“The gist of the finale is totally insane and I thought I knew what it was,” she added, “but I don’t anymore.”

Joe Morton, whose Rowan unexpectedly showed up at the close of last week’s episode, as deep-pocketed campaign donor “Damascus,” is not surprised to hear that Rhimes revisited the finale’s final cut, again. “She always shoots extra material to draw from, which is smart — though I’m sure it makes the editors crazy!” he laughed. Case in point: “When I watched last week’s episode, that whole scene [where Jake and Russel traded Command “impressions”] was different from what we knew,” he noted.

So what is the cast confident about sharing? Well…

Now that Russell, their lone lead on Rowan’s mysterious “Foxtail” agenda, has gone missing, the Gladiators “are just, like, done,” Lowes said. “They’re not even panicked, they’re completely depleted.” Save for perhaps Huck, who is mighty miffed about Dan Byrd’s fake judge advocate getting the drop on him, to then grab Russell. “Oh, it’s not over,” Guillermo Diaz warned. “Huck is coming back with a vengeance. He’s pretty pissed off about the whole thing.”

Meanwhile, as mentioned above, Mellie is about to take a meeting with — unbeknownst to her — her POTUS husband Fitz’s worst enemy, whose myriad machinations including the orchestration of Jerry Jr.’s murder. “She doesn’t know who Rowan is,” Morton reminds. “She’s never met him, she’s never heard about him….” As such, Young says, “Mellie can only know what LizzieBear is telling her” about this mysterious backer.

What is Rowan’s endgame with regards to wannabe senator Mellie aka Secret Service call sign “Foxtail”? “The only thing I can tell you is that she is Foxtail,” Morton defers. “And there is something to be achieved at the end of [the] Foxtail [operation].”

This is where we turn things over to the cast to freely brandish any buzzy words to describe (and yet not describe, at all) the finale.

“It’s nuts. The craziest season finale ever,” says Diaz. Adds Joshua Malina, “Many people will be put to difficult decisions… and the decisions that they make will lead to a certain amount of flux in status and what not.” Morton meanwhile previews, “It’s everybody against each other.”

Lowes then sums things up thusly: “Lives are in jeopardy. Lives, jobs… ‘women and children’…. Everything’s in jeopardy, for a lot of characters.”

What’s your latest theory on Foxtail and Rowan’s plans for Mellie?