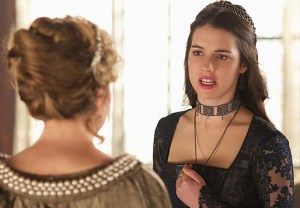 The arrival of Queen Elizabeth on Thursday’s Reign season finale (The CW, 9/8c) will forever shift the dynamic of the series’ main players — but that’s not the only game-changing development fans can look forward to.

In addition to finding out the truth about Mary’s (alleged) pregnancy, executive producer Laurie McCarthy tells TVLine we’ll get a “resolution” to the love triangle, we’ll see Bash’s dangerous romance “go up in flames” and we’ll see more Leith-Claude action that many fans want. (Sorry, I’m not ready to give up on him and Greer just yet!)

Read on for our full Q&A with McCarthy…

TVLINE | I’m not so quick to believe that Mary’s really pregnant. How soon into the finale will we know for sure?
You’ll know pretty quickly. The fallout of a coup is, in my mind, more dramatic than the coup itself. So that’s really what the finale is about. The audience will get resolution very quickly with Mary, Francis and Condé, and then it becomes about how you navigate, not only a failed relationship, but a failed coup. How will Mary and Francis find a way to trust each other again? You’ll get the answer as to what Condé’s fate will be, and we’ll finally meet Elizabeth.

TVLINE | The Mary-Francis-Condé triangle was kind of a gamble for the show. Were you worried that fans wouldn’t respond well to it?
I worried about it, but I couldn’t let it drive my plotting. I felt like people were going to be mad at us no matter what we did; if we just left them be happy and did political stories for them, I knew that would aggravate people, but I knew that I wanted to see what an open marriage would look like between them. That’s something we talked about as early as Season 1. I wanted to see Mary go through some struggles and come into her own.

TVLINE | Speaking of open marriages, I’ve always rooted for Bash and Kenna. What are we going to see from them, and their respective lovers, in the finale?
Kenna went for the right guy at the wrong time when her marriage dissolved with Bash. A mature way of looking at a relationship is: You might love someone very deeply, but if the subtext of every fight you have with them is “Can you be someone else?,” it’s probably not going to work out. That was at the core of a lot of their disagreements. … Kenna’s going to find herself in a very desperate position [in the finale], and she’s going to look to the person who’s always had her back, which is Bash, but it’s not going to go smoothly. And his involvement with Delphine, who’s very lovely but very strange, is going to complicate things further.

TVLINE | Oh, Delphine… What was that scene at the end of last week’s episode all about?
[Laughs] It was a binding ritual! What’s the big deal? … Bash got a little too involved with someone he doesn’t know very well, and it’s going to go up in flames in a big way. I love that character and I love that actress and we will see her again.

TVLINE | The supernatural aspect of the show felt like merely a suggestion last season. Is it more of a real thing now?
It is and it isn’t. If you look at that scene again, it’s all from her point of view. Anything that seems supernatural is coming from her. We utilize superstition and what people think they can do and what might be true or not. The most supernatural that we’ve gone is in people being able to predict the future.

TVLINE | Lastly, we’re meeting Elizabeth this week. What will she bring to the table?
She’ll expand the canvas of the show because we’ll be playing her own stories in her court. We’ll meet her at a fascinating time in her life, very early in her rule. She’s still driven by her heart, but is also an incredibly cagey, self-protective character. Her stories will bring endless complications for Mary and the members of her tribe; some of the characters who are in the Court of France, one or two of them will be temporarily moving to the Elizabethan Court. There will be a fair amount of cross-pollination there.

Reign fans, what are you hoping (and fearing) will happen Thursday? Drop a comment with your thoughts below!