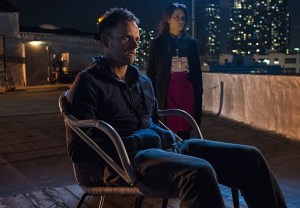 Where’s the nearest meeting? Because we’re the ones who need some support after Thursday night’s season finale of Elementary.

The hour went down a dark path as Sherlock was forced to work with his former drug dealer in order to rescue his friend Alfredo. Eventually, the P.I. succumbed to his nature and broke his sobriety.

While it’s a sad turn of events for all involved, the plot twist does have an upside: Joan announced that the senior Mr. Holmes was on his way to New York, so we’ll finally get to meet the mysterious figure!

“In the first season, we made a point of saying that Dad never shows up when he says he will,” executive producer Rob Doherty reminds with a laugh. “But I think it’s time. I would very much like to meet Dad and explore this very complicated dynamic that we’ve been alluding to over the last two seasons. There’s a lot to get out of a longer-term story about Sherlock and his father and everything between them.”

Read on for more scoop on Sherlock’s descent into addiction, Joan’s reaction to his relapse and Oscar’s future.

TVLINE | Talk to me a little bit about Sherlock’s state of mind at the end of the finale.
He’s certainly been through the wringer over the course of the episode and somehow, Oscar’s read on him was correct, that Sherlock could be broken down. It was, obviously, a long, dark night of the soul for Sherlock, and, ultimately, proved to be a little too much.

TVLINE | Just to clarify: When Joan says it’s been three days, does she mean three days since Alfredo was found?
Yes. So three days have passed between Sherlock disappearing into that tunnel and Joan finding him on the rooftop.

TVLINE | So, safe to say he’s been on a bender for three days?
At the top of next season, we will will explain what happened over the course of those three days, but Sherlock has not necessarily been on a bender. It’s quite possible that he returned to Joan and Gregson and Bell the same day that Alfredo was rescued.

TVLINE | But when we see him there on the roof, his expression and his appearance is quite out of sorts. Are we to take away that he has fallen off the wagon?
Yes. What we see is Sherlock dropping a phone that was his only means of communicating with Joan and then picking up Oscar’s kit and disappearing into that tunnel, which should speak volumes.

TVLINE | Sherlock finds out that Alfredo is safe, and yet he still gets high. Are Oscar’s words just that powerful?
No. As we get into Season 4, I don’t know that it’s a matter of giving Oscar all of the credit. At the end of the day, the hard, ugly truth is that Sherlock is an addict. Oscar is an addict. They couldn’t be more different in virtually every other respect, but that’s something they share. Sherlock has been in recovery. He’s done so much hard work. He has surrounded himself with only the best kinds of people, and sometimes that’s not enough. So what you see at the end of the finale is more about who Sherlock is and not what Oscar managed to do to him. 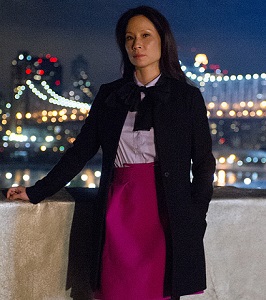 TVLINE | How is this going to affect Joan and Sherlock’s relationship next season? And what is her role here? She’s no longer a sober companion, so does she still feel a responsibility to him?
A relapse does not necessarily mean you have descended into the worst patterns of addiction again. Sherlock has been involved in a program for the last three years that is designed to address decisions like these. I don’t want to call it a “slip-up,” because that’s undercooking it, but it happens. It’s a sad truth about addiction — relapses are far from extraordinary. This one may feel bigger because it’s Sherlock Holmes and because, in so many respects, he’s more than any of us could hope to be. But when you get down to his flaws and his struggles with addiction, he’s just like anybody else.

TVLINE | Is there any sense of disappointment in Joan about what’s happened?
It’s sad for her. It’s difficult to see, but at the same she has experience with this sort of problem, having been a sober companion for a number of years. This is far from her first rodeo. And just to circle back around – I feel like maybe I drifted away from your specific question – what Joan cannot do and will not do is revert into a sober companion. Even as she grew into a partner and detective, she was still sensitive to Sherlock’s needs with respect to recovery, and that’ll remain the same. She’s an empathic person, she appreciates Sherlock, and she looks out for him as a friend. We’ll continue to see that, but by no means will she be taking on additional responsibilities. She’s going to do what any good friend should do and support Sherlock as he comes back from this.

TVLINE | And finally, is Oscar still alive? Or did Sherlock beat him to death?
That is something we will address in the fourth season.

Elementary fans, what did you think of the somber ending? Got any casting suggests for Sherlock’s father? Grade the finale via the poll below, then hit the comments to back up your pick!